Well we are hardly through the summer but I am already starting to make my plan of attack for the coming fusarium patch (microdochium nivale) season. Ya I know, it's weird that I refer to the seasons by what diseases I have but that's my biggest concern. This year my approach is going to involve some serious prevention. This is due to the fact that this is not spring and the turf is only slowing in growth and its ability to naturally combat the fungal diseases is reduced when it's not growing. I will also be attempting to use only organic pest control products which don't work in the same way that traditional synthetic pesticides do. The effective organic pesticides only work when applied preventatively.

Our coastal climate is very tough for managing winter diseases. The winter temperatures are mild enough for disease activity but cool enough to almost cease any turf growth. We don't enjoy the insulating cover of snow but also don't have to worry about ice damage. Because of this cool wet climate we are often forced to make numerous fungicide applications during the winter to protect the slow growing turf from disease.

This year I am going into fusarium season with a few extra tools and strategies that I have picked up this last year.

Fertility: Beginning early September I will switch my nitrogen source over to Ammonium Sulphate. Studies show that increased sulphur levels have a detrimental effect on fusarium patch during some times of the year. I am also decreasing nitrogen levels sooner this year based on previous years growth data. The reduced nitrogen levels should help somewhat to reduce the lush turf conditions going into the wet season. It  is also a part of my bentgrass promotion program (see below).

Turfgrass selection: It's no secret that I have been working to increase the population of bentgrass on my greens. Some say it can't be done in my climate but I disagree. I currently maintain a private putting green that is 15 years old and is 99.99% bentgrass. We have never applied any fungicides to it ever as it manages quite well through the winter. It also has very little traffic but neither does my course when it's raining cats and dogs. Currently I don't have enough bentgrass to turn off the pesticides but I am seeing more and more each month. My hope is that next fall I will have enough bentgrass to allow natural selection to start it's magic on the Poa annua during the winter. This is a controversial topic is best left for another blog post if I ever work up the balls.

Organic Pesticides: I plan on using civitas throughout the winter but have my doubts. As civitas activates natural plant defenses it only makes sense that the plant has to be actively growing for those defenses to function properly. Maybe I'm wrong but that's just how I think. I will also continue on with my phosphite program but again the mode of action just doesn't seem effective during the cold winter months. I have heard some talk that the actual oil coating from civitas could prevent some disease activity but that's a long shot.

I plan on going out with full rate applications (currently do 1/4 rate applications weekly) every month or as required due to weather. I am having a hard time with this and will mostly likely play it by ear. Most of the data I have seen is from courses that experience prolonged snow cover which in a way preserves the fungicide application. Continuous rain and warmer temperatures, however, keeps the grass growing and metabolizing which uses up the pesticide quicker. I also want to keep my sprayer off the greens as much as I can. Less traffic = good.

I have seen some recent studies with phosphites and civitas but all of them were done on putting greens that were covered in snow for prolonged periods. I plan to see what can be done with these products when snow isn't an issue.

Synthetic Pesticides: I will continue to use the usual synthetics as needed to prevent catastrophic turf loss. Nothing new here. My ultimate goal is no synthetics but I'm not holding my breath. Hard to sell memberships and green fees with dead greens.


All in all it will continue to be an eventful and busy winter. I'm going to need a roof and heater for my roller. Double rolling in 5C pouring rain....it's a possibility I'm not looking forward to.

The Little Mossy Green that Could

So way back in the spring when I started my little moss experiment I had no idea how useful it would be to my every day maintenance on the course. It has become an essential tool for me.

The moss study is ongoing but lately I have been using the study green to make decisions on rolling frequency on my putting greens. I feel that rolling is a very important tool for managing turfgrass pests on golf courses such as dollar spot (Sclerotinia homoeocarpa) and Fusarium patch (microdochium nivale). Rolling isn't just a tool to make your greens smooth any more.

Rolling has many benefits that we are just now starting to realize but it's not perfect. Like any turf management practice there is a balance that needs to be achieved to get the best results. I use the study green to see what rolling frequency is getting me the best results. Rolling too much at certain times of the season can cause thinning and even a Poa Toupee. Not rolling enough can increase the incidence of certain fungal diseases. The results are constantly  changing week to week due to an large number of variables. The test green allows me to make an easy decision. I can observe turf quality, density and disease pressure to find the optimal rolling frequency on a daily basis. I can find the plot that has exactly what I am looking for and apply that management practice to the rest of the course.

My little green has 6 different daily rolling frequencies ranging from 0-8x daily. So far I can say that anything over 3x daily is pushing it. Turf quality has been consistently below acceptable levels so I wouldn't waste your time rolling more than 3x daily on any test plots. Typically I see the best results from the 1x and 2x daily rolling. 3x daily rolling only seem beneficial when temperatures are cool, growth rates are high, and fusarium patch activity is also high.

I think that this kind of test green is an overlooked part of most golf courses these days. Have a small area to compare different cultural practices is a fantastic tool for turf managers to optimize their playing surfaces. In the future I will always have a similar area where I can compare my daily management practices to see what will give me the best product.

The putting green will be an important tool going into fall and winter. Until recently I didn't know of any cultural practice that I could do in winter time that would have an effect on fusarium patch. I have no control over how much it rains or the moisture levels on my greens so I had no real way of managing this disease. With my recent discovery which suggested that lightweight rolling could have some effect on fusarium patch I am cautiously optimistic going into the fusarium season. Until I know exactly how rolling is suppressing the fusarium I will have a hard time managing this disease with rolling alone. I have a hunch that the fusarium is being suppressed in the same way that dollar spot is suppressed by lightweight rolling. So far research shows that it could be due to an increased microbial population in the soil that is suppressing dollar spot. If this is true then I might have a hard time controlling dollar spot in the winter due to decreased soil microbe activity due to the colder temperatures. Fusarium activity in the winter is also slower so maybe there will be an equilibrium that can be reached. Either way I will have to rely on my small putting green to tell me what the optimal rolling frequency is. 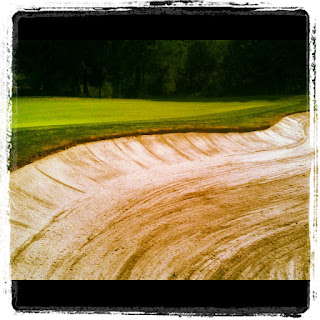 So far I am using the following strategies for dollar spot control:


Other than the Urea fertilizer applications everything above is considered organic. All of the actual pest control products are registered organic by the OMRI .


I know what I am doing is working as the disease potential is very high right now. Our fairways are smoked with dollar spot. This is due to the fact that the only management practices that are carried out on the fairways is cutting, fertilization, and irrigation. That is all, no pesticides whatsoever. So it is expected to see disease on our fairways at all times of the year. We are also struggling to keep adequate moisture levels in our fairways due to dense thatch layers and a poor performing irrigation system. Moisture is key to ensure adequate nutrient uptake which isn't happening on our fairways at all.

I have left a few control areas on the course to evaluate my different product applications and management practices and I have to say that they all work, alone and together!

So far I am seeing civitas and rolling alone providing complete control. I haven't seen any difference with the Rhapsody control plots though that is to be expected when virtually every square centimeter of my putting greens is rolled at least once a day.
I have to say that I am a little disappointed though. With the success of all of these products alone and combined it is quite clear that I am wasting resources if I continue to keep using them all. I will continue with the program for the rest of the month but will seriously have to consider using all of the tools next dollar spot season. Right now I am thinking of using civitas and rolling only due to their mode of action on the dollar spot fungus.

So who knew? It turns out that in my climate organic pest control is very doable during the summer months. I even feel that in slightly more extreme climates success could be had if all of these practices were combined. If history means anything I should be back into fusarium season in a month. I plan on maintaining the organic pest control plan into the fall depending on the success rate. So far I have had experience with only phosphites in the winter months with no overwhelming control.


Posted by Jason No comments: