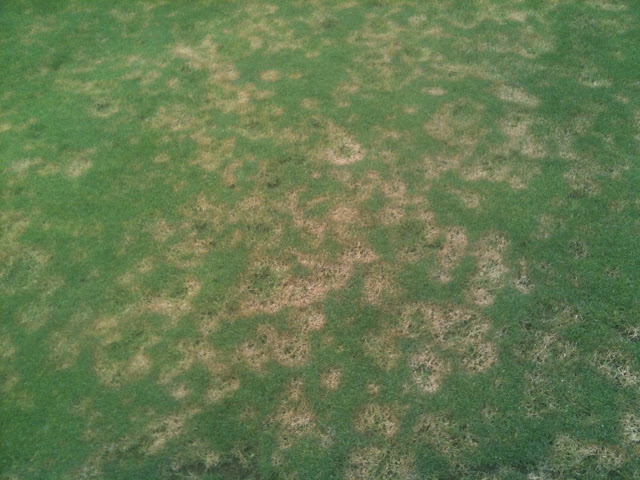 It would probably be an understatement to say that the fusarium activity levels are high these days. The above picture illustrates one of the more extreme attacks currently on my course. Last week while scouting for disease I made an interesting observation that I thought I would share.

As I only apply fungicides to my putting green surfaces there are varying levels of fusarium activity throughout the course but the areas that are hit the hardest are the approaches about 3m from the front of each green. In these areas the fusarium activity is extremely high.

In Past years I would also see these disease levels on the tees and most fairways but this year there is very little fusarium so far.
So why are my approaches being hit so hard while nothing else is being touched? The maintenance on my approaches is virtually identical to my fairways and tees with one exception. My approaches receive fertilizer from both my green and fairway fertilizer applications. It is very hard to get the areas fertilized with no overlap so essentially the approaches can receive about 2x the nitrogen than the other areas.

Normally I wouldn't notice a drastic difference like I am currently seeing as my fertility program on my tees and fairways was much different than it is now. This past season I cut my fairway nitrogen fertility in half and have been following the growth potential model for tee and green nitrogen fertility. With these changes the effects of nitrogen have really become apparent.

What has really surprised me is the total lack of fusarium patch on my putting greens this winter. The picture to the left shows the approach to my 8th green. The picture below shows the putting green which hasn't received any traditional pesticides since early June. These two areas are only a few meters apart but the level of disease is drastically different. You would think that the putting greens would be the most affected but not in my case. This is even more surprising as my putting greens are predominantly Poa annua! You know, the weak, undesirable weed that most of us fight off, myself included.


About a month ago I noticed some slight fusarium activity on my 8th green so I went out and applied some iron sulphate with some phosphites. I didn't think that I would get any control but a month later there is no sign of any disease. I can't blame the lack of disease activity on the weather as 3m away the fusarium is going wild! I'm not sure if these products have helped the situation but I think they have given the turf the slight edge that they need to fight off the disease for the time being. I think if I was still fertilizing the way I used to I would have dead greens without pesticides.

In the end I think the biggest difference in disease pressure levels has been nitrogen inputs, not amount of shade, traffic levels or anything else cultural. I am seeing intense fusarium activity on approaches in full sun, full shade, wet, dry and everything in between. I am also seeing virtually no disease activity in all of my greens tees and fairways with the same environmental conditions areas. My approaches don't get any more traffic than my tees or fairways do. We don't turn on the approaches when mowing and they don't receive any cart traffic either. We don't aerate or topdress the affected areas nor do we any of our fairways.

What I am beginning to see is just how important nitrogen is when managing this destructive disease. I theorized about this earlier this fall and now I am seeing it in full action. The areas infected with fusarium are very clear and distinct and all the clues point to nitrogen. For too long I was not paying enough attention to nitrogen rates and neglected the importance of probably the most important cultural practice we employ on the golf course, nitrogen fertility.

If you are having a tough year with fusarium I challenge you to look at your nitrogen rates and timings and compare them with the growth potential model for your specific course. Are you applying too much nitrogen in the fall? Do you even know what your nitrogen rates are? It is very hard to determine the rate of release when slow release and water insoluble nitrogen sources are used and this leaves a lot of room for error in my opinion.

UPDATE: I have recently changed my ideas about the increased levels of disease on the approaches. This can be seen here.
Posted by Jason