It has been almost 2 months since my last post and it's not because nothing has been happening. It was a really busy and good summer and I was trying some new things out to combat disease on the golf course. Since my last disease update the main disease of focus has been Dollar Spot.

Last year I was successful in combating Dollar Spot on my greens but my fairways were wiped out. It was the worst I had ever seen actually. As always applying a fungicide to my fairways wasn't possible.

I accounted this extreme disease to a few factors.

In the past there really wasn't much I could do for Dollar Spot other than apply a lot of granular fertilizer and sweep dew which was costly. This year I decided to try something new on my fairways.  This winter I got an almost entirely new equipment fleet which included a Toro Workman 200 Spray system mounted on a 4wd diesel workman. The 4wd was a must as the fairways here are very very steep. This new sprayer opened up a lot of possibilities for me. Instantly I could spray fairways in a few short hours with whatever my heart desired.

Right away I threw wetting agents into my fairway program. I used Dispatch as it was the most economical. I wasn't looking for a miracle, just anything better than nothing! Next I was going to melt down UMAXX and apply it at the same time as the wetting agents. After some discussion on Twitter I was convinced to go with straight urea as it was cheaper and other superintendents had noticed no significant changes between the two nitrogen sources at a 3 week application interval. The use of urea also allowed me to more accurately follow the growth potential model on my fairways than if I was to use a slow release nitrogen source. The soluble nature also increased the likelihood that the nutrient would get into the plant. I have to say I was not disappointed!

@gtshaffer I used uflexx and umaxx in past. Last year did more side by side tests and saw no diff with straight urea
— Jeff Sweet, CGCS (@JeffSweet2) January 22, 2013

This plan took on the disease on a number of preventative fronts, primarily giving the plant what it needed when it needed it. The wetting agents allowed me to keep the soils relatively moist but not too wet which kept the nutrient supply to the plant more consistent. The soluble nitrogen was also quickly taken up by the plant and the relatively frequent applications kept the supply consistent. I also decided to go with a light a frequent irrigation regime to try and keep soil moisture as consistent as was possible with a terrible soil.

A quick aside about using straight urea. I know there are a lot of apparent reasons why urea is bad (volitization, burn potential, it's not organic, growth surge, blah blah blah) but I have to say my experience this summer was nothing but fantastic. Science has shown that urea is quickly taken into the plant and in turf volatilization is of little concern. It is considered one of the best nitrogen sources available. In my experience this summer I did not have any apparent issues with nitrogen losses. I had a good consistent feed all summer long even with low rates of 0.12kg N/100m2 on a 3 week interval in July and August. Growth surges were more dependant on rain and temperature than anything else. I would try and apply before a rain to wash the urea and wetting agent into the soil but a few times I had to use the irrigation system with no issues. Mixing th urea was also very easy. I would just pour the bag of low grade urea into the basket on the sprayer and it would melt as fast as I could fill the tank. Best of all was the cost. With a cost of less than $120/ha/ season to fertilize fairways I was a happy camper! If you get Ag grade it's about half the price as "greens grade" and melts just as good. In some areas it's also tax free wink wink. 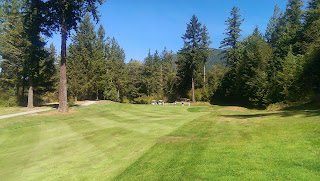 So now that we are safely out of Dollar Spot season I can say that this plan was an astounding success. My fairways have never been better actually. Of course there was the odd incidence of disease this summer but they were minor. One of my approaches was particularly hard hit as a wet spot prevented me from taking my sprayer on it. My tees were also hit with a bit of the disease but I attribute this to the use of slow release N. Next year it's straight urea on them too!  I think this program will also benefit my winter disease management plan on fairways. With less available nitrogen going into winter I hope to see a reduced incidence of Fusarium Patch. Time will tell on that one...

I wish all disease management approaches were this good. Improved conditions, less disease and significantly less cost! (other than a brand new sprayer of course) There are a few things that I will do differently next year but they don't relate to dollar spot and will be the focus of my next blog post looking back on an entire season of growth potential fertility.