Primo Maxx (Trinexapac-ethyl) is a plant growth regulator that is primarily used during the warm summer months. It has a lot of uses such as reducing top growth, decreasing nitrogen requirements( kind of), improved shade performance, improved turf density and quality, and many other claims.

Over the past few years I have applied Primo mostly in the summer months based on a 150 growing degree day (GDD) application interval which is optimal for Poa annua. I have also applied it sporadically during the winter months with not too much thought put into it other than reducing the number of times I have to mow greens in the winter when my staff are laid off and it's just me. 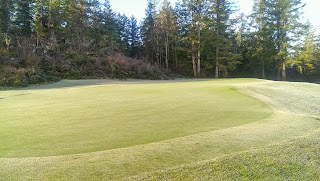 Recently I thought of how winter Primo applications could fit into my IPM program. Last winter I had good success using phosphites, iron, and lightweight rolling. I also monitor growth rates to determine when the optimal time to mow is to reduce any stresses associated with mowing too often or scalping from not mowing enough. I also used Civitas last winter but the surface sealing in the cold weather was unacceptable in my opinion. Again, I used Primo, but it was sporadic and almost whimsical. Could Primo enhance my efforts to fight Fusarium?

To be honest I have never really looked too seriously into it. Not many people use Primo through the winter and I have never read anything pertaining to using plant growth regulator during the winter months.I have come across some articles about using Primo in the fall but nothing about using it all winter long. Why would we? The grass is already growing super slow. Most people use Primo for putting green consistency and green speed related reasons. These typically aren't issues in the winter. Well I have a few hypothesis that I think should be looked at more seriously in the future.
Now all of this is unproven and purely my hypothesis as far as I know. I think it is something that should be looked into in the future and is something that I plan to play around with this coming winter. Unfortunately it is extremely hard for me to set up a proper test to really get to the bottom of winter Primo applications. Who knows? Primo in the winter could turn out to be a terrible idea, I don't know.

If anyone is using Primo in northern latitudes during winter please let me know how it is going? What are you noticing? Has it affected your pesticide applications? Have you noticed any negative effects? Post in the comments below and let me know what you think!
Posted by Jason