You probably aren't wondering what that crazy greenkeeper is up to in Pender Harbour but I'm going to tell you anyway!

Overall disease pressure has been interesting. On areas that receive no treatment (fairways, tees) the disease was pretty bad. I have talked with a few other superintendents and most are all seeing the same thing: Crazy bad fusarium on fairways, especially on approaches. This is even apparent on approaches that had fungicide applications made in the fall. I have made no fungicide applications of any kind to my approaches. As the sun rises in the sky I have observed the grass start to out-compete the fusarium and recovery has begun!

My fusarium management plan has evolved over the years and here is what I am trying right now.

The area of interest that I have been focusing on the past few months has been disease spread. Fusarium is a perverse disease especially on the West Coast of Canada, but I am starting to think that it really isn't that bad. If it was so bad all areas of turf would become infected like it often does beneath snow cover. What I am seeing is only a few isolated spots that become naturally infected with the disease. I am probably wrong, but what I am thinking is that maybe we are just making it worse by spreading it around with our mowers as we tend to keep mowing all winter long. What if we stop pushing growth with fertilizer applications and cut back on mowing? Looking back on my records the majority of the spread happened during a 2 week period in late Oct-early Nov. Maybe a Primo app to fairways and tees during this time would eliminate the need to spread the fusarium around with the mowers in the cool wet weather?

For the most part is is hard to really see the effect mowing has on disease spread as we mow different directions each day and the disease appears to be random. The only area of my course where mower direction is rather constant is on the putting green collars. The picture above shows the straight line spread of the fusarium on my 7th green collar. 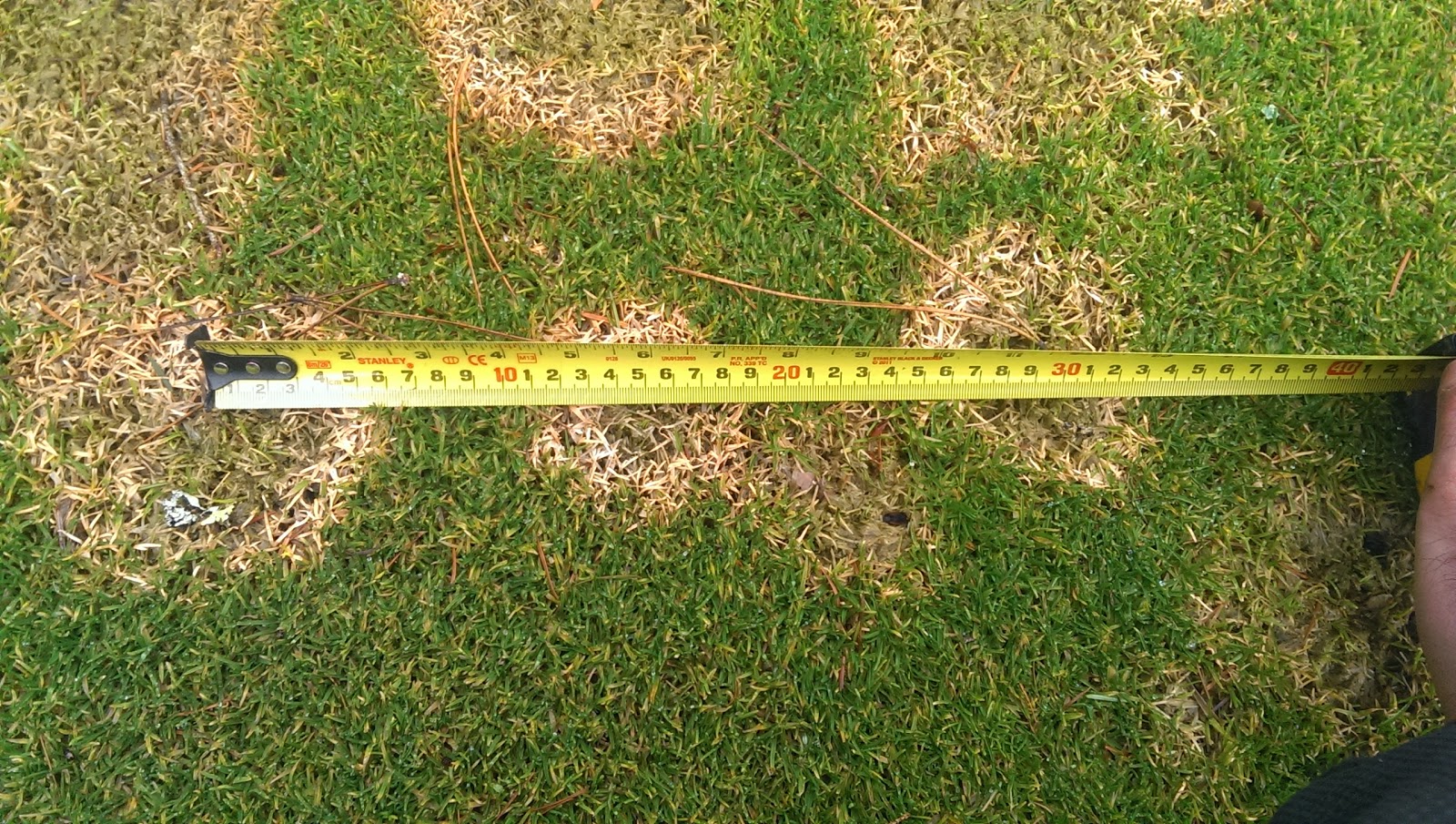 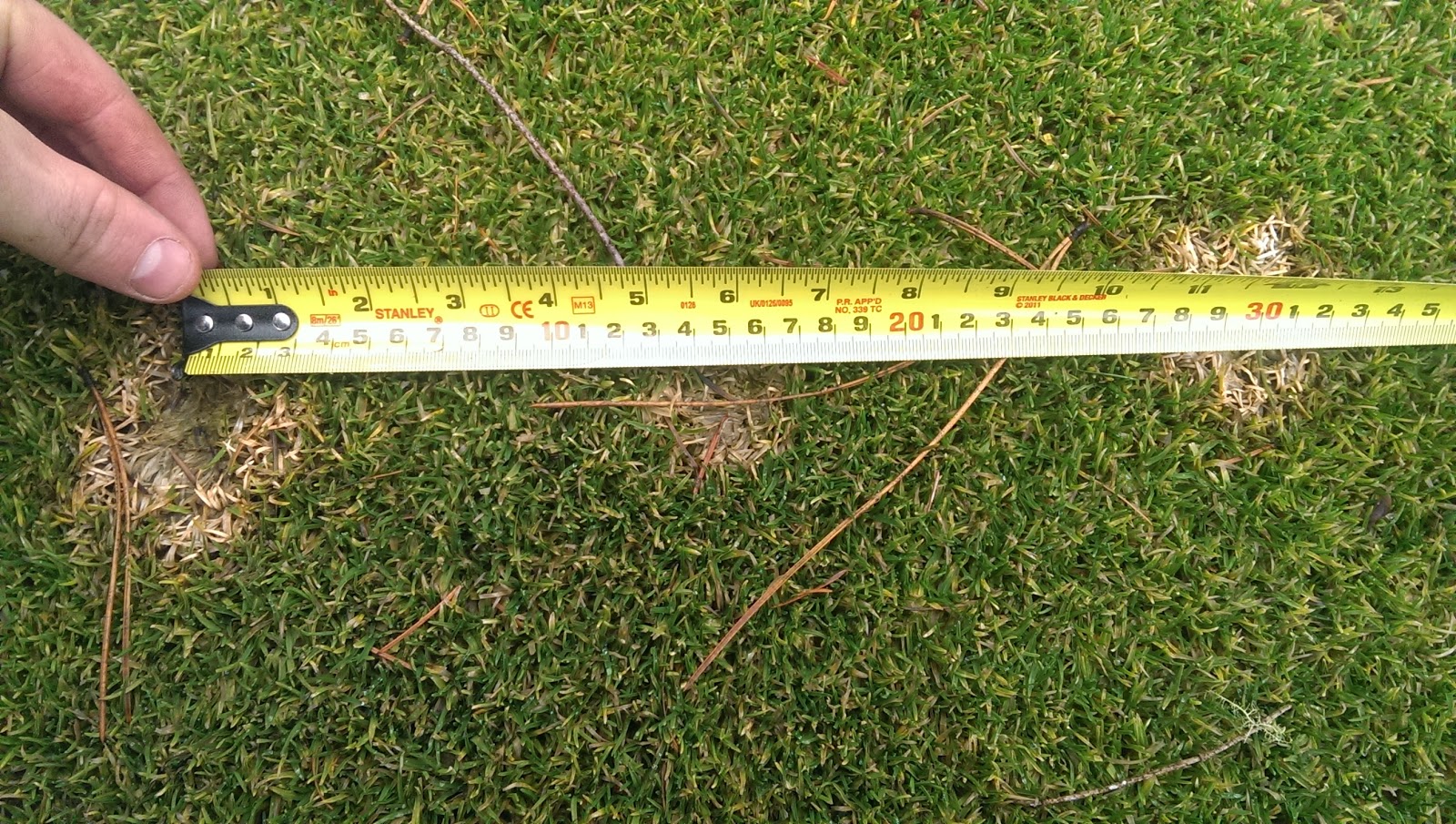 In recent weeks I have been looking and asking about how disease is mechanically spread. It seems that it is common knowledge that it is spread by mowers but that's about as far as it goes. With something that has such an impact on the incidence of disease don't you think there would be more research done on the subject? How can we minimize the spread without treating the surfaces with fungicides before mowing? Could this be another reason to roll fairways and tees?

I recently wrote a post about tracking pesticide use in a meaningful way. Since then I have committed to my cost and EIQ goals and have been tracking my progress. I have also been using my new tools to make better decisions about what products I use and how I use them. So far I am ahead of the game but this is probably most likely due to the cool winter we had which generally extends the duration of control of most pesticides applied.

As you can see from the above table I am currently 11 days ahead of my goal for pesticide cost and 29 days ahead of my goal for EIQ. The way I use pesticides has changed dramatically since I started using this goal tracker. My goals and where I am in relation to them are always in the back of my head now. I think that of all the things I have tried over the years, tracking my pesticide use could make the biggest difference in their use reduction. This will also help me better determine the effectiveness of all my pesticide reduction or IPM practices over time. Gone are the days where I say that such and such a practices generally reduces pesticide use. Now I will actually know!
With these goals and theories in mind I had to find a better way to get control and keep my costs and EIQ down. What I came up with is spot spraying every day that I monitor disease. I would count and treat disease in the hopes of significantly reducing the spread of fusarium on the putting greens. This was also a great way to keep interested in the rather slow and boring winter months!

Here is the data I have collected over the past month. The following table shows the raw data.

This table shows the data broken down by area and days since last monitoring. The average at the bottom is basically the overall disease pressure on the course.

Here is a graph of the disease pressure! 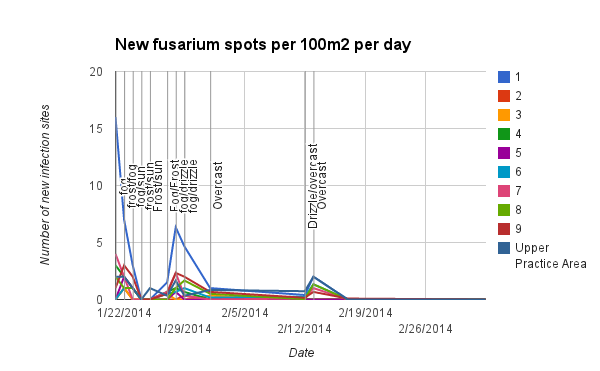 As you can see disease pressure has been pretty low lately. I would also say the same is true for areas that aren't treated with pesticide as it seems the damage is now on the mend. It might also help that nothing other than greens has been cut since mid November.

This data's main use is to calculate the incidence of new disease but it might also help to shed some light on disease spread. I will investigate anything further if I notice any interesting trends over time.
While out aerating greens yesterday I noticed a lot of new disease popping up. With the warm and very wet weather the fusarium is back! Spring is finally here I guess. The forecast is calling for relatively warm and dry weather this week so I will continue spot spraying and will try to limit the spread as much as I can. I don't expect that spot spraying will be a viable control option for much longer, but plan on doing it as long as I can manage. I will let you know how it goes in the next disease update probably in a month or two.