Reasons to Not Aerate in Spring 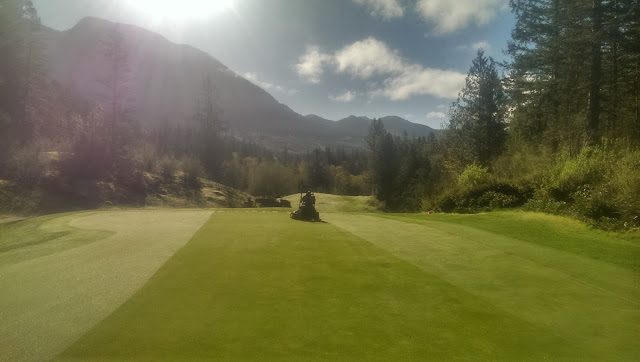 I'm going to try and talk myself out of aerating in the traditional way each spring. Won't you join me?

Last year I asked "Is Core Aeration a Thing of the Past?" This year I am wondering if solid or core aeration where sand is worked into holes is needed at all? Here I will try and find some reasons why I should and should not aerate my greens in the spring time. Before we start I'll go over the traditional reasons to aerate and then I will discuss why I might be able to get those benefits in different ways.

Traditionally we core aerate to remove organic matter, reduce compaction, increase soil air and increase drainage. That's pretty much it. Core aeration and filing solid holes with sand are two ways to do this but surely there has to be other ways especially with the new developments we have made in the past 10 years or so?

For the past 3 years we have been deep tine aerating our greens in early October. This was because we had developed some troublesome layers that were below the reaches of traditional aerators. These layers were significantly impeding drainage and the result was a lot of difficulty keeping our greens dry. Since then, we have had almost no drainage issues on our 30 year old greens. The only puddling we have seen has been following a 4" rain event in mid December of 2015. Other than that they drain great! So as far as drainage goes I think the regular deep tining should have us covered.
So we deep tined last fall but on the West Coast of Canada there isn't much growth through the winter. There is even less growth when you use the growth potential formula to schedule fertilizer applications and keep the grass growth regulated with Primo Maxx all winter long. Since we aerated last fall, we have only cut our greens 13 times! That's 13 mows in 175 days! We have had so little growth that on some of the greens you can still see where the aeration holes from last fall were. It doesn't make much sense to me to aerate again immediately after the holes from last aeration have finally healed fully.

Last year I applied about half as much nitrogen as in any year prior. This was done with the help of the growth potential formula as I shared in my last post. So far in 2016 I have only needed to apply 0.6g n/m2( about 0.13# N/1000 sq. ft.) I have never been a fan of pushing growth around aeration to close up the holes. This seems counter-intuitive to me. Remove organic matter then push growth and consequently build up organic matter in the process? If I only aerate in the fall I am not pressured to get the greens in good playing condition in a short period of time. I can leave the holes open for much longer in the fall thus increasing the benefits of aeration further. If we are producing less organic matter through less growth there should be less need for removing organic matter with core aeration.

I think often we do things in Canada because our neighbors to the south do them. The thing is that a lot of the courses in the USA have growth all winter long and therefore need to aerate a lot more. Is this the case in Canada? Should we base our aeration practices more on how much growth we get based on our specific climates and not as much on what others do in their specific climate?
One of the biggest down sides of aeration that often is ignored is preferential flow. Basically when you poke holes in a green and fill them with sand, any water that is applied to the green flows down the nice free draining holes. This leaves the other soil areas of the greens suffering from much less, if any water flow. As nutrients need water to get into roots this also creates problems with fertilizer uptake from the soil. This creates stagnant conditions that always results in the turf surrounding the holes suffering. Often we associate the nice green grass in the new aeration holes as a sign that aeration works. I see the suffering grass surrounding the new holes as a major down side of aeration. Instead of having the water flow great through a limited number of holes, I would rather it flow evenly through the entire soil profile. This is why you always flush salts before you aerate. Of course, we will have to do things to keep the flow rates high, but I think this can be done without filling holes with sand. We regularly needle tine aerate our greens to help with surface drainage and gas exchange. Is this enough?
One of the most difficult times to manage disease on the West Coast is the spring. The other difficult time is early fall. The rest of the year I have found disease management to be relatively easy. For this reason I think it might be important to limit practices that make disease worse during the challenging weather conditions. Things such as pushing growth, dragging sand around, pulling cores and scraping them off the surface, and creating areas of weak grass through preferential flow area all things that have the potential to make disease issues worse. I think there's a good chance that I can get through the spring without a broadcast fungicide if I don't do an aggressive aeration.
This year the poa is starting to seed about a month earlier than normal (what is normal anymore?). The poa is stressed and doing an aggressive aeration will only stress it out more. The timing of spring aeration on the Coast is not ideal. Fall is much better as the poa isn't seeding and stressed in this way. Opening up the greens during this seed head cycle might also be a big reason why we have so much poa on greens. Even though I'm not aggressively trying to promote bentgrass, I have noticed we have had a lot more bentgrass spread on our greens lately and anything I can do that further promotes the bentgrass isn't a bad thing.

Part of my management program this winter was to not grow much grass. This would require less mowing and therefore would result in less stress and disease spread on the greens. Part of this plan to limit mowing was to continue regular topdressing through the winter months. Instead of cutting the grass down the the crown, I would add sand up to the leaf blades to accomplish the same thing as mowing while also diluting any surface organic matter. With our old topdresser we literally couldn't apply sand light enough to not cause a major disruption. With our new topdresser we can apply it as light as we want. This is a game changer and one of the reasons why I am re-evaluating our old way of aerating our greens.
I have also never really aerated the fairways here. We have once or twice since 2007 but the holes were too few and far between to have any real impact, other than dulling my mowers. Since we have stopped aerating our fairways they have only improved! Again, with a growth potential based fertilizer schedule on fairways, we have been able to better time our nitrogen applications on our fairways and this has resulted in much less thatch. This has been so successful that we now have virtually no wet areas on the course despite having a very wet winter with over 1000mm (50") of rain. Where we used to spend a lot of time and money fixing wet spots, we now are spending a ton of time pulling rocks as the thatch that used to pad them is now gone. Even though it's not wise to compare greens to fairways, this example shows me that not aerating is not the end of the world.
During the winters we also get lots of good natural aeration. Frost heaving and heavy rains help flush the soils and leave them nice and fresh come spring. With the drop in winter traffic the greens also get a nice break to recover during the slow growth time of year. Why then do we need to aerate in the spring following an extended (6 month) period of rest? I can't speak for everyone, but at my course, winter is a period of rest. I guess if you had a ton of play during the winter you might need to help them out a bit.

Of course there is also the disruption to play in the spring. Just as conditions improve from the winter, we go back to square one. Aerating in the fall is far less disruptive to business as most people are starting to go south and are tired of golf. Why should we disrupt play early in the season when everyone is excited to get out and play if it's not 100% necessary.
Just like everything I like to try and see both sides of the equation. So why should we aerate in the spring? What are the good reasons that I can find that justify the need to undertake this disruptive practice?

The biggest reason is that we have always done it this way. Yeah yeah, that's a bad reason but for the most part, we have aerated in the spring, and have lived to golf another day. The big thing here is that we have done it and have managed to keep grass on our greens. Was it because of spring aeration or despite it? I don't know because we have never not done it. Others have but they are few and far between.

So what's the plan? What would I do if I stopped doing my regular spring aeration? Well for now I am thinking of only coring my aprons and approaches. The reason for this is that there is overlap in fertilizer applications on these areas thus more growth and need to remove organic matter. We also want to prevent collar dams from forming as the sand that we do apply gets caught more in the longer grass surrounding the greens leading to buildup. Removing more material than we add will reduce the collar dams over time.

Or maybe I'll just solid tine them and fill the holes with sand as other have had success doing. It's still disruptive though and has many of the downsides of core aeration except obviously the need to remove the cores.

So if I do in fact decide to not aerate in the traditional way this spring I need to have a plan for if things don't work out. What if I'm totally wrong? When I am working in potentially hazardous areas in Search and Rescue we always like to have an escape route. We never want to commit to something 100%. As time goes on and new information become available we need to keep our options open to stay safe. So what if after skipping aeration this spring things don't work out. Well I can always go more aggressive in the fall. If I am not happy with the way the green perform this year I can double up in the fall. I can also needle tine more frequently through the season if needed. Last year during the extreme drought we only needle tined our greens twice. Even if I have to needle them 5x as much, it doesn't add up to significant labor compared to core aeration and has virtually no disruption on play.

Who knows?
Posted by Jason

Email ThisBlogThis!Share to TwitterShare to FacebookShare to Pinterest
Labels: aeration