This triggered my memory of the moss disease I had on my greens a few years ago. I wrote about that in a post in 2013. The reason I hadn't thought much about this interesting moss disease was that for the most part the moss on my greens is gone.

What did I spray?

Well in 2012 I sprayed Kocide 2000. It worked but was pretty harsh on my turf and the moss quickly came back.

In 2014 I sprayed quicksilver but left my upper practice green unsprayed to see what would happen with the serious moss disease infestation. Also, this spray wasn't successful with most of the moss coming back shortly after my 3 successive applications. 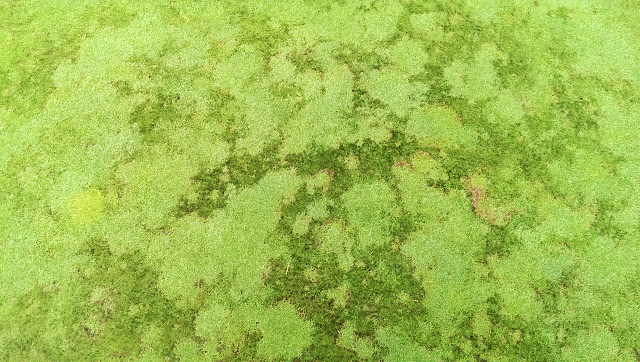 Today it looks like this and I have not sprayed anything on it between the pics in 2013 and today to try and kill the moss. 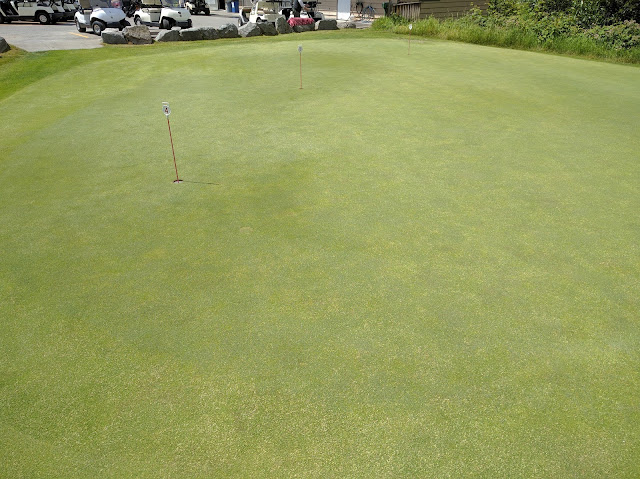 There is literally no moss on this green whatsoever. 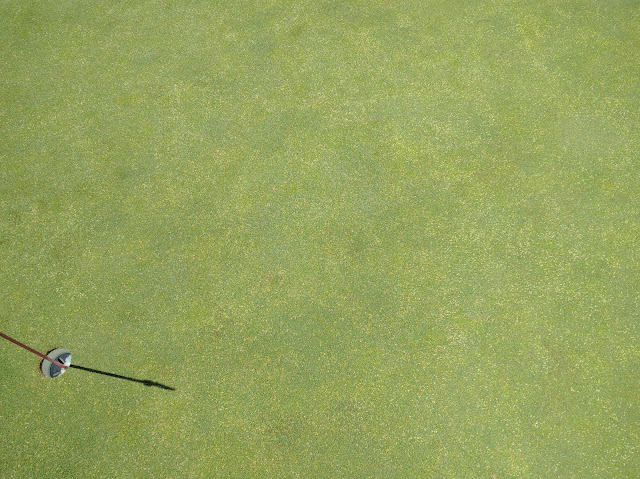 So if I didn't spray anything, what happened?

The moss was diseased. Yes, even moss gets disease. You can see the brown moss in between the moss/grass interface.

I've learned a lot about moss over the years. I have a hunch it is less tolerant to traffic than grass is and might not tolerate frequent mowing. I also use pin locations to target moss infestations with golfer traffic. This might be one positive side of those troublesome Adizero golf shoes! So I'm thinking, no, the moss is on the ridges on your greens not because it's dry, it's because you don't put any pin locations on the slopes so very little golfer traffic is focused on these parts of your greens. This year we've also rolled our greens 115 times and it's mid June...?

Since the old days when moss was an almost constant problem on my greens I have completely changed the way I fertilize my greens. Where I used to withhold nitrogen in August (when moss seems to really take over at my location) I now apply the majority of my nitrogen fertilizer in the Summer. This is based off the growth potential model and has been universally positive for my operation. Not only that, but it has also allowed me to cut my annual fertilizer rates in half and still see improvements in turfgrass quality.

Since 2014 I have basically ignored moss everywhere on my course. My limited success with Quicksilver and relative reluctance to use a herbicide on my greens left me without much in the way of chemical controls. I also changed the way I thought about weeds and started focusing on the desirable species instead of the pest. So far this has worked out great! It's not just a pipedream haha. Basically I've really focused on grass plant health and it has paid off. Forget the moss, grow good grass!

If the pathogen that was killing the moss was a fungi, then it is probably controlled by some of the broad spectrum fungicides we use on turf to control turf fungal pests. Over the years I've made some progress to reduce the fungicide use on my course. For some reasons (I have no clue why) the upper putting green requires almost no fungicide. Maybe this is why the moss disease was allowed to go crazy on the moss?

So there you have it. I kind of hate how hippy dippy this all seems. "Change the way your fertilize, use less fungicide, roll more maaaan, let nature do the work." It really does sound a bit idealistic for my liking but what can I say?