Why Use Growth Potential to Schedule Fertilizer Applications?

This is a very similar post to one I did 4 years ago but instead of theorizing about the benefits of Growth Potential I am speaking with some experience.

The growth potential fertilizer model isn't something that has been studied in depth by science (what's taking them so long) but that doesn't make it wrong. For this reason there are some people that are still quite skeptical of using a model such as this to schedule nitrogen fertilizer applications. While I'm obviously no scientist, I do now have almost 4 seasons under my belt and can share some of my initial reasons for making the switch and some of the reasons I continue to use it as a base for my fertilizer applications.

Way back when I used to schedule my fertilizer based on the typical cool season growth curve similar to the one in the diagram below. We've all seen this. Big growth jump in the spring, a slowdown in the summer and a big growth jump again in the fall. I would then apply most of my fertilizer during the times of maximum growth. How many people still fertilize this way?

Here's the problem. That is the growth potential curve for places just north of the transition zone. For anyone in Canada (unless your name is Ryan and you grow grass in Osoyoos or anywhere in the Okanagan really.) this really isn't how grass grows in our climate.

Here is what the cool season growth curve looks like in my climate. 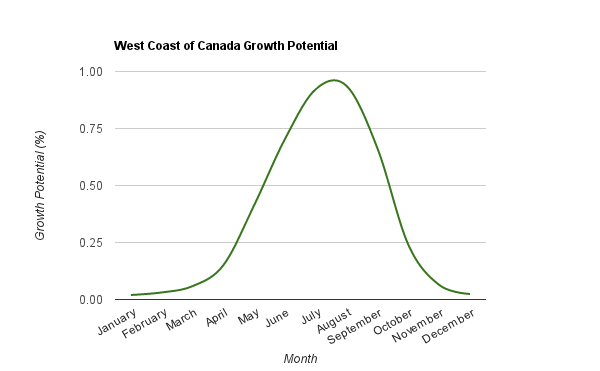 So by using the growth potential formula (see climate appraisal form from PACE Turf) we can calculate the potential for grass to grow in our particular climate. As you can see we get very little growth in the winter spring and fall and a lot of growth in the Summer. It rarely gets hot enough to limit cool season growth here in the summer months.

So if you believe and use the first cool season growth potential curve and understand that every course and climate is slightly different then you will probably really like the growth potential formula. 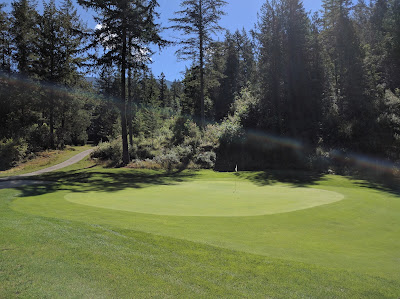 Now the idea of fertilizing like this is to give the plant what it needs when it needs it most so that it can grow healthy and produce the playing surfaces that we desire. Back in 2012 I made a bunch of predictions and theories and it is interesting to look back over the last 4 years and see what really has changed for the better on my course.

This past April I wrote a post explaining how I have never had such good control of growth rates on my course. This control has continued right into mid June. Despite the roller coaster weather we have been having, the growth rates remain more or less in control. We haven't had a single "growth explosion" this year and clippings clumping together are non-existent. Does the following clipping yield from my greens look like a familiar curve?

One of the main themes of my blog over the years has been me sharing my experience trying to fight turf disease and weeds without pesticides. Part of the success I have been having over the years making meaningful reductions in pesticide use has been a result of using growth potential to schedule my fertilizer applications.

I've always known that fertilizer has to have some impact on turf disease, I wrote a post about how N could be the most overlooked nutrient in IPM plans. Obviously it's not just me, one of my mentors early on in my career always used to say "don't feed the disease" referring to fusarium patch and nitrogen fertilizer.

For me, fusarium is the big issue from September through June and Anthracnose and Dollar spot are problems in July- September.

In general, Fusarium is made worse by higher nitrogen fertilizer rates and Anthracnose and Dollar spot are made worse by low nitrogen fertilizer rates. The only problem with most of these studies is that they look at annual N rates and not the rates of N applied only during active disease cycles. I apply 12gN/m2 (2.5lbs of N/1000sq ft) each year but 80% of that is applied in the Summer. Knowing when these diseases caused problems on my course and looking at the first generic growth potential curve for cool season graph and now you can see the problem.

Back before 2012 I was over-fertilizing during times of fusarium activity and under-fertilizing during times of dollar spot and anthracnose activity. Simply by switching the timing of my nitrogen fertilizer applications to a growth potential curve that is fine tuned to my particular golf course I have had much more successes managing these diseases without traditional pesticides.


It's not hippy dippy idealism, it's just common sense, stuff that we already know and stuff that has been proven by science. So even if you don't agree that using the growth potential curve developed by Pace Turf is a good idea then you surely must agree that it's probably a good idea to apply fertilizer in quantities that reduce the impact of the most troublesome turfgrass pests at your site while keeping playing conditions optimal. Guess what? It turns out (for me anyway) that GP helps me fertilize exactly in a way that limits the impacts of these diseases on my turf and I'm not getting any complaints about how the greens play. 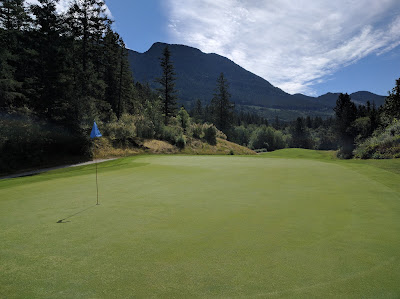 The past few winters I have had less and less issues fighting fusarium patch on my course. This past winter was downright easy despite receiving almost 50" of rain and having warmer than normal weather. I have now continued into July still without the need for a traditional pesticide to control fusarium. It isn't because of my tolerance for "garbage dump conditions" (see the comments in this post), the greens are actually more or less completely clean of any disease. I have never seen my greens with so little disease, during such adverse weather conditions (wet and cool June) without the use of traditional pesticides. I have a few thoughts about this but that's a topic for an upcoming post.

When it comes to Dollar spot I haven't needed a traditional pesticide to control this troublesome turf pest since 2013 (coincidentally the first full year I implemented GP and.....knock on wood haha).

Will it work for you? Maybe, but there are also a ton of other things that I do to help with this disease, again, a topic for another upcoming post and the topic of this recent post with a killer comment section. I know you can't control dollar spot with nitrogen alone, but if you are having problems with this disease, compare your nitrogen rates to those that the GP formula suggests you apply. Are you over, under? Maybe this can help you reduce the impact of this major disease on your course.

Anthracnose. Last year I had some issues with this disease but didn't require the use of traditional pesticides. Typically anthracnose is made worse under low nitrogen and potassium rates. Last year was the first year that I halved my nitrogen rates on my greens and I was also getting fancy with potassium and MLSN guidelines. This is probably why I saw anthracnose for the first time in my career last year. This year the plan is to apply potassium 1:1 with nitrogen (to ensure that K stays above MLSN guidelines) during the summer which will see the majority of my annual K applied during periods of high anthracnose damage potential. Stay tuned to see how that goes! 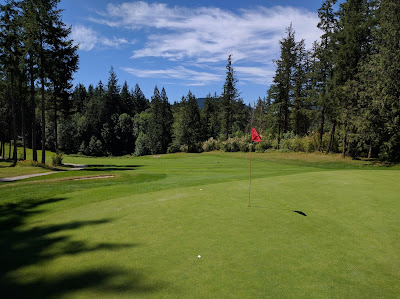 So for me, at my course, growth potential fertilizer has inadvertently made a huge impact on my need for traditional pesticides and has allowed me to produce some of the best conditions of my career despite a 30% reduction in cost and EIQ of my overall pest control budget (traditional and ISR pest control products included).

I have less data on this but over the past few years we went from having a lot of chronic wet, thatchy spots on our fairways to having almost none. This despite going through a wet winter with over 50" of rain an extremely wet June and July so far. Typically during rain events that we have recently been experiencing it would take days for the course to dry out, disease would explode everywhere and the course would be a wet soggy mess. This year we are out playing with carts on the fairways a few hours after receiving an inch of rain. Also, we don't aerate fairways. I wonder if this has to do with having a growth rate that matches the optimum temperature for biology in general for my climate. Are the "munchy bugs" in the soil consuming the organic matter produced by the grass at a similar rate that it is produced? It looks that way.

Too good to be true? I would say so but wow, I am seeing some cool things here.

Is there a better more predictable way to fertilize grass? I haven't found one.

When I ask those who say using GP is bad how they would prefer to fertilize grass I am left with, "use your eyes and apply nitrogen to keep the colour acceptable." The problem with this is that this is reactive fertilizer management, it is a step backwards in my opinion. Applying fertilizer AFTER you notice a decline in colour or growth or continuing to apply fertilizer without knowing if it's too much. The goal of GP is to have you applying the right amount of nitrogen for the time of the year so that you don't see any change in colour or disease pressure or clipping yield.

Running nitrogen too low or too high for the time of year can have consequences. More disease, turf thinning, excessive thatch and soft conditions, the need for excessive aeration, more mowing, more fuel consumption, you name it.  If the grass is growing faster it needs more food is how I like to think about it. Without adequate fertilizer during periods of optimum growth you can inadvertently stress your grass leading to bad things. 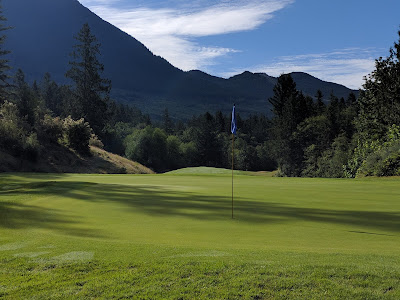 For me I like to use fertilizer to make the plant able to handle stress, combat disease while growing as slow as possible before problems arise. Growth potential helps me do that in a much more consistent way.

If you aren't yet using the growth potential formula to schedule your nitrogen applications, I highly suggest that you at least do the calculations and compare what you are doing to the theoretical amount you should be applying. Maybe you are spot on, or maybe it might help you understand some of the issues you are having out on the course.