I used to think about overseeding all wrong. 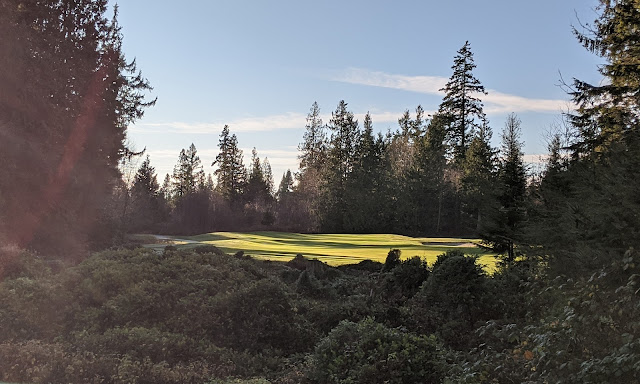 Coming onto a new property offers any superintendent a fresh perspective that is hard to have when you have been at the same property for along time. This is my experience anyway. This past year at my new course I have really noticed the differences in turf species composition and have thought a lot about why this may have occurred. The more I think about it the more my way of thinking about species composition and overseeding practice have changed. Let me explain.

Poa likes high traffic areas more than other turf species, or does it?


Take a look at the following picture of one of our greens from above. You can see the patch of yellow turf behind the green. This is disesased poa annua coming out of winter. There is a pretty uniform patch of poa behind this green on a slope that experience high traffic stress from mowers turning and golfers walking. 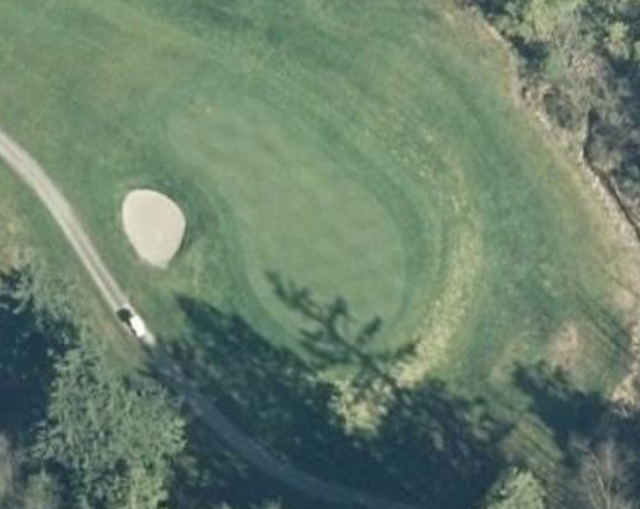 There is no denying that this poa is here because of high traffic stress but is it here because it is a better suited turf species for this environment? I will argue that it isn't the best suited species for this environment even though it is currently the dominant species in this particular area. In my experience, poa also has a limit to how much traffic it will tolerate. These high traffic areas will have more turf death regardless of the species growing there.

When golf courses are made they are generally seeded with improved turfgrass varieties. Sure, some people will sprig poa annua to maintain uniformity on new turf areas but hardly anyone seeds a new course with poa annua. Turf breeders and researchers put a lot of effort into developing superior turf varieties to help make our jobs as turf managers easier. So initially most of the grass on a given course consists of improved varieties.


Whether it is from traffic, drought stress, winter damage, disease, or divots, grass will always be dying on a golf course no matter how good you are at managing it. The longer that time goes on, the higher the probability that any given grass plant will die.

If you aren't overseeding, what fills the voids left behind by the grass that dies each year?

In many cases this void is filled with poa annua which is a native turf species, or unimproved turfgrass variety. Poa has the advantage of having its seed everywhere and a creeping growth habit. When the time is right, it fills the voids.

If you aren't adding improved varieties to fill the voids you are by definition getting unimproved turf varieties and poa is definitely an unimproved turf variety. In areas where we can irrigate it, apply fungicide, and with lots of control we can often keep the poa alive year-round. When resources are limited or environmental pressures are high the poa checks out as can be seen pictured above and below.

Below is a picture I took this summer behind another green. You can see this area gets a lot of traffic and overall is in bad conditions. There is, however, some grass that is handling the situation just fine. This is an improved variety of perennial ryegrass that was originally seeded 25 years ago. Over the years some of it has died due to the various stresses that can occur as well as there is also the possibility that the other turfgrass that was included in the blend originally seeded was not suited well to the stress. Because this ryegrass has a bunch type growth habit it won't grow to fill in the voids left behind. 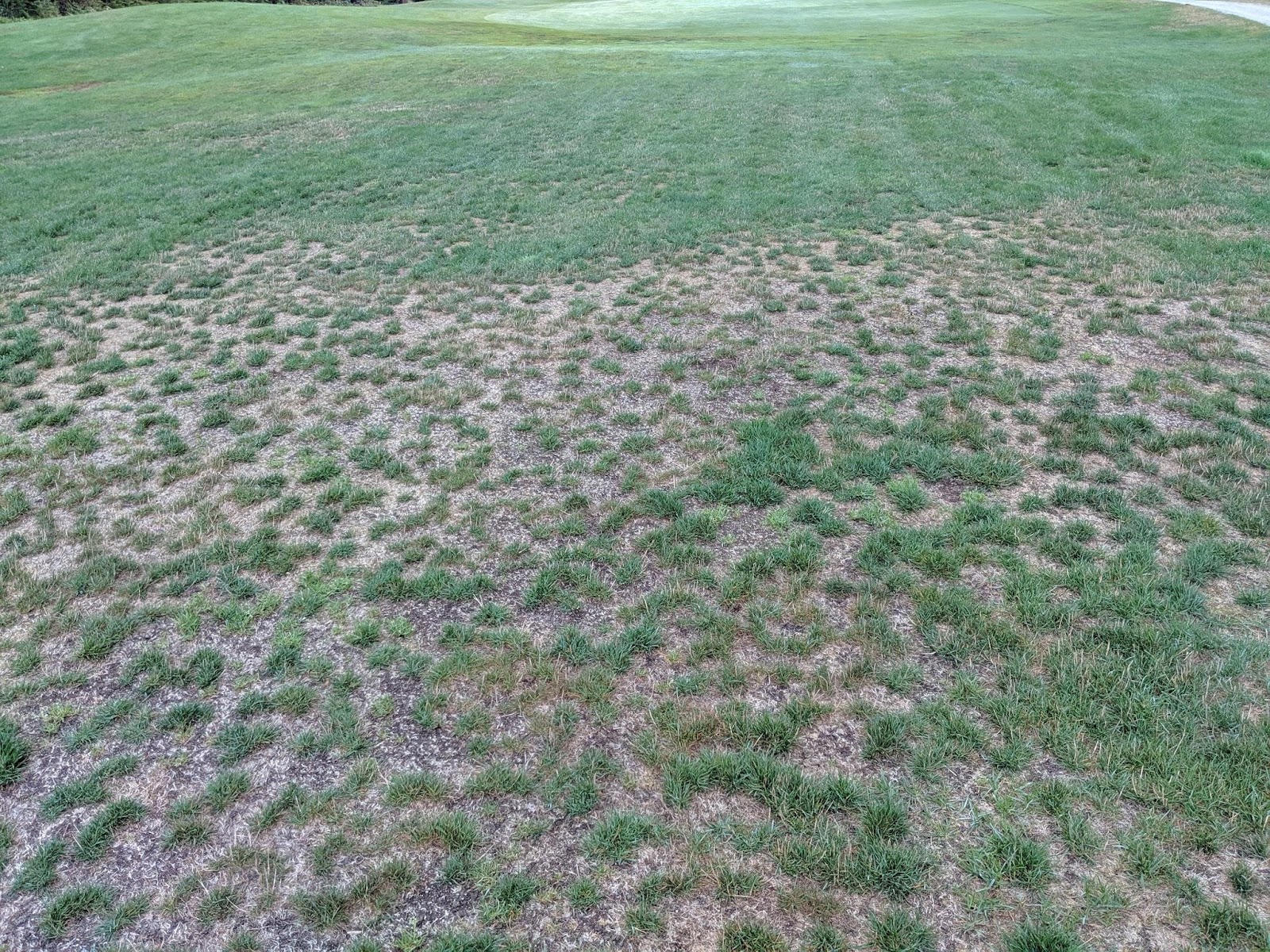 Over time as the improved varieties died for various reasons poa annua would fill the voids but in this area during the summer it doesn't receive enough water for poa to survive. Poa is an unimproved variety and if we want it to be a good species for this location we need to apply more resources to it during the summer. Namely, more water which is a limited resource and very expensive to add more sprinklers for these areas. Doing this sort of thing over time will only add to the cost associated with maintaining the golf course when resources are already stretched to the max.

We spend most of our time handwatering areas like this around our greens and not actually watering the greens! Even then, the turf quality suffers because the poa can't handle the harsh situations.

So poa will fill the void and spread when the weather is right for it but will check out when the going gets tough adding to our workload and reducing turf conditions on the course. More money for worse conditions....great plan!

This sort of situation doesn't happen overnight. Originally this area was all improved turfgrass varieties and probably looked a lot better than it does today. Each year, a small percentage of the improved turf dies, and poa fills the void and we are forced to expend more effort to keep the quality of these areas the same because we didn't add any new improved turfgrass to fill the voids.

So over the years we go on, not adding anything to replace the grass that dies and eventually we have greens, tees and fairways that are almost pure poa annua and rough and green surrounds that look good when the conditions are right for poa and look like crap when the conditions get difficult as can be seen in the picture below. The issue here isn't that the originally seeded ryegrass can't handle the traffic, it's that nothing has been done to replace any ryegrass that has died over the years.

I don't blame anyone for this. I see it everywhere and have done similar things myself!


If we want to take control of conditions and costs we need to re-introduce improved turfgrass varieties that are designed to help us with our efforts but also need that realize that it will take a long time. The picture above took 25 years to get to this point so we can't expect results in only a few years without a major resource injection. We can, however, realize that some of the good grass will die every year and ensure that we replace it with improved turfgrass instead of unimproved turfgrass.

"But the poa is just too competative." Sure, at times the poa is very competitive but there are plenty of opportunities to seed into stand of poa when it is not competitive. I would argue that poa is actually not very competitive for long that it is competitive. Poa suffers through the winter, suffers during and after the spring seedhead flush, suffers in the summer heat, but LOVES early fall conditions. So for a month or two a year, poa is truly competitive. If it was as competitive as I've been lead to believe, we wouldn't have any improved turfgrass left on our course after 50 years but guess what? We do!

In recent memory there have been a lot of new improved varieties that offer creeping growth habits so that we don't need to constantly overseed to fill these voids. This is a great thing and will surely result in improved turf conditions year round with even less effort.


So while we often want to see instant results from an overseeding program I would suggest that it might be better to go light but spread that seed everywhere to slowly make up for any improved turfgrass that might die for whatever reason while also incorporating new varieties with creeping growth habits to lessen the workload over time.


This year we had issues with water supply and in the short term the solution is to reduce run times or areas that we water but this only results in a lower quality playing surface as the poa that fills most of these areas can't handle anything less that soaking wet.

The tweet below perfectly illustrates how improved turf varieties can impact conditions with the exact same effort.


Golf is played on turf. The type of turf we maintain has a big impact on how our courses play and how much money it costs to maintain. Going forward our budget for seed has gone up by 300% but ideally it would go up 1000%. We are evaluating different varieties for how they perform under establishment and the microclimates across the course. I already have my suspicions which turf will perform the best but also want to make sure.

Politically speaking, spending a ton of lightly overseeding an entire property isn't a good idea. There will be no huge dramatic change that sodding or heavy overseeding will provide. Over time, however, it should result in improved conditions for less money. By applying more seed to high traffic areas or areas that receive more stress but also applying seed everywhere else I think we can make huge improvements over time while continuing to reduce the costs and environmental impacts of golf.