Last fall I started a small overseeding study to see which turf type would be suitable for our fairways as "if you aren't overseeding improved turfgrass varieties you will invariably get unimproved turfgrass" like poa annua which requires more water, fertilizer and attention than we can give it.

In the study I was testing 3 types of turfgrass. Perennial ryegrass, turf type tall fescue and creeping bentgrass. I couldn't test all the varieties of each species so I chose blends of the species which isn't important for the purpose of this post. All I wanted to see was how each species would establish with virtually no effort other than spreading the seed on the ground. I had plots on dry fairways, wet fairways, shady areas, sunny areas etc.

The seeding rates were super low because the idea was to put improved varieties everywhere for a low cost and then let them spread out over time. The seed germinated in 10 days.

Around the same time I noticed some really nice looking grass on one of our tees. A closer inspection showed it to be creeping bentgrass. The previous superintendent assured me that no creeping bentgrass was ever seeded on tees, or anywhere other than greens during the winterkill episode of early 2017 where we had record low temperatures and lots of ice! 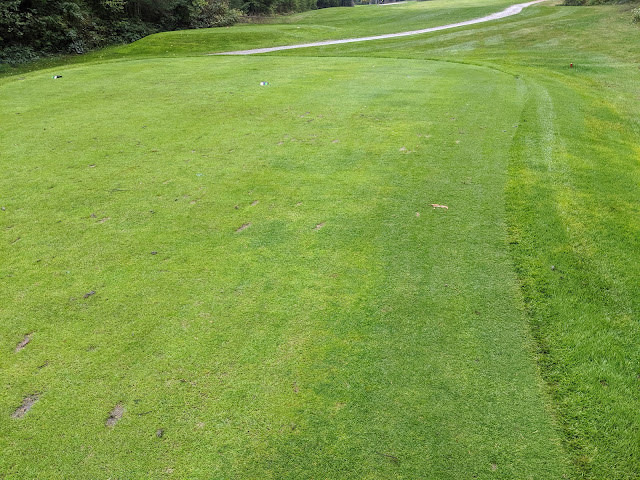 This spring we applied very little fertilizer to the fairways due to the uncertainty surrounding covid19 with the hope of reducing yield so that I could manage all the mowing on the course by myself. This made the poa annua pretty angry. There was a lot more poa here than at my previous course probably due to  a better irrigation system and historically higher resource availability (fertilizer and wetting agents). As the poa was looking so bad some weeds started to establish but I also noticed many patches of really nice looking grass which turned out to be creeping bentgrass.
Where did all this bentgrass come from though? After a while it dawned on me. The seed was tracked on golfer's feet from the greens that were overseeded in 2017! Fairways following the greens that were hit the hardest by the winterkill had the most bentgrass!
So it's highly likely that all the bentgrass in the fairways was accidentally tracked onto the fairways from the greens 3 years ago.
Back to my overseeding study. Not surprisingly the results weren't great. I didn't do a formal count or anything but there is almost no visible difference on the tttf and ryegrass plots. On the plots seeded with bentgrass there was some visible bentgrass plants visible after almost 1 season but it doesn't matter. I have my answer to what turf species will establish across a wide range of conditions on our fairways.
The more I think about it and observe this accidental overseeding the more in makes sense that bentgrass is a great candidate for fairway overseeding.
The seed is super small. This makes it possible for you to get even coverage of a large area with not that much seed. Sure bentgrass seed is expensive but if you calculate it on a cost per seed basis it's actually quite cheap ($0.000037 per seed). The small seed also makes it easier to get good seed to soil contact as it easily falls between the existing turfgrass plants. I also like to think that because the seed is so small, the birds will eat less of it than other turfgrass species but who knows.
If you apply bentgrass seed with a purpose built seeding machine you will be forced to apply a high rate of seed but if you think outside the box you can apply the seed almost infinitely low in rate. For me I applied it in my study at a low rate of 5g/m^2 and while the results aren't shocking if you are looking for instant total coverage, there is more than enough plants surviving to maturity allowing the grass to spread over the next few years.
To get the super low seeding rates I used a push rotary spreader with the gate full closed. The seed is so small that it would work it's way through the closed gate edges at the perfect amount! Spacing was 1m or less as the seed doesn't go far as it is so small and light.
By the numbers you can get really good coverage with very little seed. Let's say we want to get 1 seed per cm^2 (5 seeds per square inch approx). That is 10,000 seeds per square meter or 100,000,000 seeds per hectare.
There are 13,200,000 bentgrass seeds per kg. 1 pail of seed is generally 11 kg so that pail will give you 1 seed per cm^2 on 1.45 ha of turf! For many recommended overseeding rates that is still an ultra super low rate. For me I say why not go lower....way lower! Here's why.
Improved bentgrass varieties are a superior plant. They have many desirable traits that native grasses don't but one of the best things about improved bentgrass (and unimproved bentgrass) is its spreading growth habit. Bentgrass will cover a lot of ground if it's allowed to. It seems that with the newer bentgrass varieties, some disruption in the form of divots, ballmarks, disease scars and winterkill!
Take this patch of bentgrass in the following picture. It's about 30cm ( 12") across and was likely established in the spring of 2017. It's highly probably this this patch is from a single parent plant and has spread about 10cm (5cm in each direction) per year for the past 3 years. In order to get good bentgrass coverage we don't necessarily need a lot of seed, we need a little bit of seed everywhere and all the time. 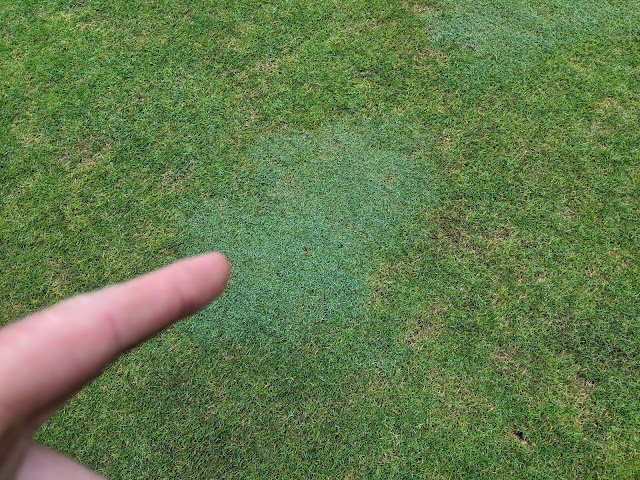 A few meters away from the above picture is the middle of the fairway where most golfers walk.... 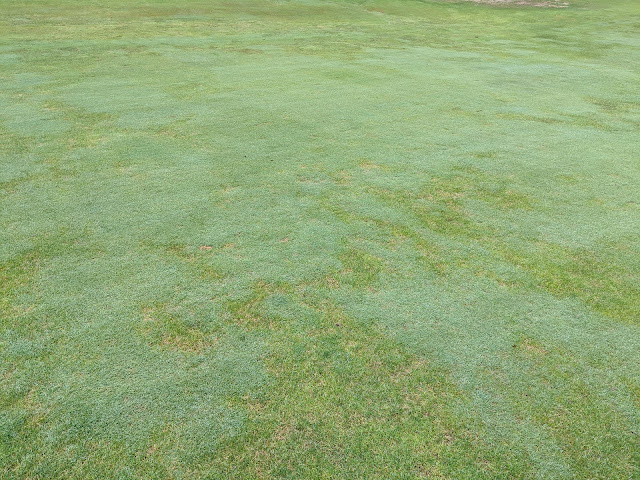 Oh shit, we accidentally have predominantly bentgrass fairways! Imagine how good they would be today if we were trying! Even if we were trying very little....like a few dozen Kg of seed a year on the entire course. Hook a cheap pull behind rotary spreader behind your fairway mower once a month with a pail of seed in it and the gate set to closed! Bam!
If we had to wait for enough resources to afford to overseed our fairways at the recommended rates we might be waiting for a long time. In that time we will see water and fertilizer use go up and conditions going down. Instead I think it might be better to get the improved genetics everywhere ASAP and then work on letting the grass establish over time hitting the entire course lightly every year multiple times.
I like the multiple times a year approach as I never like to "put all my eggs in one basket." If you decide to go big on the overseeding strategy and it rains 100mm the following week you just watched a significant investment flow down the drain. If the poa is still too competetive you will also be wasting your money on a big overseed. If you put a little out often there is less financial and weather related risk.
When you go big on overseeding or even bigger with a full on renovation you might want to push growth with extra fertilizer. This creates high growth rates and lots of thatch on the new bentgrass surfaces. With the overseeding method described above, you actually apply less fertilizer to reduce the competitive ability of the poa annua. I haven't noticed any visual difference in thatch on the bentgrass vs poa areas.
I think the biggest risk is not overseeding at all because the reduction in resources required with these newer turf varieties is significant which is especially important as resources like water are harder and more expensive to find. In 5 years this could have been the best $2000 I ever spent! 😜
So what have you got to lose? Half ass overseed your fairways with bentgrass today and thank me in 3-10 years haha.
Posted by Jason