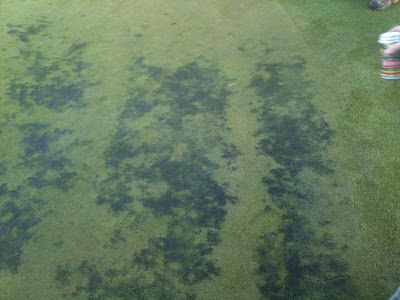 On a recent trip to a neighbouring golf course we were checking out their progress on moss eradication.  In Canada, Kocide 2000 has recently been registered for use to control silvery thread moss.  As can be seen from the picture, we like to drink pilsner AND the moss control is working.

Kocide 2000's active ingredient is copper hydroxide.  When sprayed in high volumes of water over numerous applications it has been very successful in controlling moss on putting greens.  Some people suggest that adding wetting agents and acidifying agents also help the efficacy of the Kocide.  Others add iron as well to reduce the effects that copper has on inducing an iron deficiency in the plants.  It is not uncommon for the turf to turn a bright orange colour after a Kocide application unless iron is also applied.

The real neat thing about the above picture is not how great the Kocide is working but the two linear tracks of turf that don't have any moss on them.  These tracks are where the tires from the triplex greens mower travel on the clean-up pass.  What about the tire marks allows for healthy Poa annua growth but no moss??

A couple plausible explanations that I have come up with are:

Now the main reason that the moss is so bad on these putting greens is drainage.  This course has notoriously bad drainage due to high clay soils.  The greens are USGA sand based greens but once the soil is saturated the only way out is through drain pipes.  Many courses out there, mine included, also continue to drain downward through the native soils under the sand rootzones.  At Pender Harbour we actually don't have any subsurface drainage on our putting greens and we rarely have any issues.

Many people claim that low cutting heights are to blame for moss infestation.  In this picture is would seem that this is true as the collar turf cut at 3/8" has no moss.  It could also be said that there is no moss on the collars because of all the traffic that they see from turning mowers.  I have also seen in my experience putting greens cut at very low heights of cut with no moss.  Greg Evans has talked about this in his blog.  The Pender Harbour Golf Club has very little moss and we have been cutting low (less than 0.100") for over a year now.

Other people see moss develop on ridges more than on the flat areas of the putting greens.  They blame the scalping of the mowers for their issues but I am starting to think otherwise.  On this course with bad moss, there was a lot of moss on the ridges and perimeters of the greens but much less on the flat areas of the greens and areas where traffic was concentrated. The areas on the putting greens that received the most golfer traffic saw the least moss.  The ridges and perimeters of the greens never see pins placed there and therefore there is very little golfer traffic on these areas.

Since I have started rolling my greens daily at the Pender Harbour Golf Club I have seen a steady decline in my moss population.  This fact also contributes to my theory that increased traffic will potentially reduce moss.

The real cool thing here is that this clearly shows that cultural control of moss is quite possible, even on poorly drained soils and low heights of cut.  All too often the first thing turf managers go to is chemical control and often totally neglect what else they could be doing to solve or prevent the problem in the first place.

I think this needs further study and I plan on going back to this course to take way more pictures.
Posted by Jason