The Rolling Fool, My Experience With "Extreme" Rolling 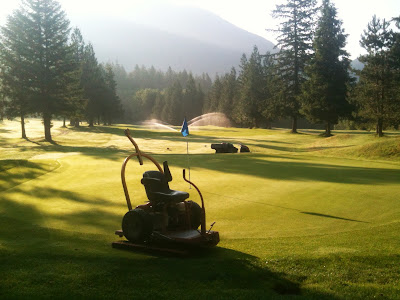 In the past year I rolled the putting greens at my course about 200 times. I'm not sure if this is some kind of record or not but what I do know is that nothing terrible happened contrary to most "expert" advice. I am often perplexed to the advice from so called experts warning of certain doom if you roll your putting surfaces more than 2 or 3 times a week. What I have to ask them is have they ever tried rolling daily, 2x daily? I have and take it from me, it won't kill all your grass if you do it right. In this post I will share my experience with rolling, the pros, the cons and what to watch out for, based on my practical hands on experience.

Firstly I would like to share why you would consider an "extreme" rolling regime. It will give you a uniform increase in green speed almost instantly without the need for lowering the height of cut. There are a million studies out there on this phenomenon. Rolling has allowed me to maintain consistent green speeds without having to mow every day. This has resulted in a huge savings of labour running and setting up my greens mower. It has also been proven to reduce and even prevent some fungal pathogens namely Dollar Spot. They can also prevent mower scalping by smoothing the putting surface. I have a few anecdotal observations to the disease and even weed reduction but they have yet to be proven by science so they should not be used as a reason to roll your greens yet.

The biggest affect rolling is going to have on your putting greens is compaction. Broad statements are often made that rolling leads to increased compaction and extra traffic stress. In a broad sense this is very true. Essentially what you are doing when you roll your greens is you are squishing down the leaf blades, the thatch layer and even the soil. Come to think of it every time a golfer steps foot, mower makes a pass, employee changes a pin you are compacting the soil and turf canopy. When you roll the putting greens you are essentially uniformly compacting the surface because that's what we want right? Uniformity. Now compaction can be a problem for putting greens so the key is to managing this compaction. It is important to note that the studies being conducted at Michigan State University have shown no significant increase in soil compaction on sand based putting greens that receive regular sand topdressings.

Personally I use a lightweight machine. It allows me the ability to roll as often as I please and has a lesser impact on soil compaction which is good. It also allows me to roll daily and not have to cut daily. Heavier machines compact the soil more and therefore can't be used as often. So why roll so much? Remember, I don't roll for green speed, I roll for disease reduction. I think that there are also some very beneficial uses for heavyweight rolling but they are purely speculative at this point. Here's a hint, moss.

Over the years there are a few things I have learned about managing compaction when you roll like a crazed maniac. The biggest detriment to turfgrass health and density has come from when we roll when the soils are saturated. The soil moisture levels are very important to know if you are rolling on a frequent basis. I have seen drastic density losses almost overnight simply from rolling when the soils were wet. How wet? Well that is something that will be different on every soil but for me if I get a VMC reading over 35 I will now not roll. This is where the art of greenkeeping comes into play and where you will have to learn from experience what is best for your site. Whoa, Whoa! Mr. Numbers is talking the art of greenkeeping? Ya, play around with it and watch your VMC. When I am able to maintain the moisture levels in my greens between 20-25% I haven't seen any loss of density due to rolling period. Another tool that is gaining popularity is needle tine aeration. This is a great way to reduce any negative compaction effects from rolling and is nothing but good for your turf.

I have heard of the Poa Toupee effect and just last week I got to witness it on my study green. Frequent rolling following aeration can cause the roots to shear off and not regrow. I saw this occur on my plot that was rolled 6x a day! Because of this it is probably a good idea to limit rolling following aeration especially when significant lifting of the turf surface occurred.

Other negative impacts that rolling can have is wear from changing direction and careless operators. A lot of damage can be done very quickly if the operator isn't fully aware and trained on the machine. Self propelled lightweight rollers are really bad for this in my experience. Rolling following a heavy topdressing can make this issue even worse as the sand acts like tiny sharp ball bearings. To avoid this issue there are triplex mounted rollers that are much easier for the operators to use. The only drawback is that it requires another triplex mower which can be costly. Since the following picture was taken we have seen the approach return back to perfect health despite daily rolling. It's all about operator training and awareness.

So no, "extreme" rolling isn't all happy time and flowers like you might think I've made it out to be. There can be negative issues if rolling is done wrong just like all cultural practices. I hope that what I have learned over the years can help you avoid the mistakes I have made and have a very successful rolling program on your golf course.


Posted by Jason No comments: