So here's a funny story.

Last Tuesday the 28th of Oct as I was finishing up mowing fairways I took a pass across the approach of the first green just to see how it looked. The past 2 days had seen a heavy frost so I wasn't able to get onto the greens to have a good look. To my horror the entire green appeared yellow. "Oh shit! I've killed the greens.....again!!!" 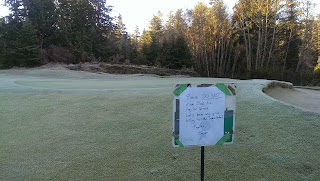 The Saturday before I couldn't believe how great the greens looked. Everything was looking good going into November and the winter. I wasn't going to let what happened last winter happen again. Dead grass this time of year sucks to say the least.

So that Tuesday night I got no sleep. I was a nervous wreck. The next day I went out to check on everything and yep, I thought I had killed them.

I tried to figure out what went wrong. The Sunday before was a nice day and my weekend staffer assured me there wasn't any frost when he rolled. I didn't believe him or the pro shop staff. This had to be it or so I thought.

My next step was to review all of the products that I had applied to the greens over the past month. Maybe I applied a bad combination of something. A word of caution. No matter what combination of chemicals you punch into Google you will almost always be able to find someone who says it is lethal to grass or extremely phytotoxic. CRAP!

At this point I thought all hope was lost. What am I going to do now. I sent off that dreaded email to my boss outlining what I thought was happening. "I think I killed the greens again so....."

I spent most of that morning just walking the greens, feeling hopeless and sad. I felt crushed and had lost all of my passion for my work. As I was pacing I get a text from the Super down the road.

"how's it going"
"shitty, my greens are dead"
"what happened?"

We tried to figure it out over text message until he informed me that "4 turf techs will be there in an hour" He was bringing all the Supers on the Coast up to see me.

There's nothing better than looking at someone else's dead grass. It's always a good learning experience. No one likes to see nice greens, come on now.

My wife had also come down to the course to see what was up. I took her down to the greens. She thought they looked great. I didn't believer her. She doesn't know grass....

They supers showed up and I took them down to my dead green. The first thing they say is "you asshole, there's nothing wrong with these greens" They aren't perfect, I've had some issues lately with drainage and keeping the density up, but were , in their opinion, looking good. I didn't believe them at first. What I had witnessed was beautiful putting greens with a vibrant green colour almost overnight turn yellow. Nothing happens quickly to turf except die.

We toured the course. I tried to tell them how my greens were dying. They weren't buying it. "what a jerk, invite us down here to see some dead grass and all we get is this? Show off!"

I wasn't showing off, honestly. I didn't sleep a bit for almost a week. I was a mess, depressed.

When you put so much effort into something, thousands of hours. Your family has to put up with your long hours away. When the greens suddenly die all of that hard work and sacrifice was for nothing. A waste....

Oh, yeah, this is a funny story.

So after the visit I felt a bit better. I have a great deal of respect for my fellow superintendents and trust their judgement even though I was still convinced something was up (who knows it could still be). I actually slept a bit that night.
I posted a pic of my dead green on twitter and also got some great advice. "they look great" "sometimes the best thing to do is nothing"


@PenderSuper sometimes the best thing to do is nothing at all. They look good for Oct 31. Nature will regulate. Trust your gut.
— Greg Austin (@bcgolfsuper) November 1, 2013

I now had some options, try and do something or do nothing. I knew enough to know that I was too emotional to make a sound decision so I put my trust in them and did nothing. It's not like I had a lot of other options this time of year.

I took 2 days off to go play with helicopters. I needed to clear my head and take a break. 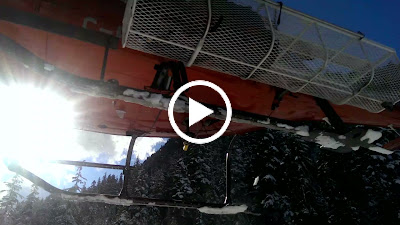 Upon returning to work I wasn't so down on the condition of the greens. They were far from perfect but seemed to still be alive.

I promptly called them back. Hey, I want to know too! I thought it a bit odd for them to have figured out what was going on a week later without actually stepping foot on the property.

CIVITAS! What I was seeing was a lack of Civitas. They figure I had become accustomed to seeing the artificial green from the Harmonizer pigments. Good God they were totally right! I had no clue what colour Poa actually was this time of year! They did because there weren't using it.

The Saturday before I noticed the yellowing I had cut the greens but was then unable to get onto the greens for a good look due to persistent frost and darkness. When I finally was able to get back on 3 days later the difference in colour was drastic. I must have removed most of the pigment during the cutting. Add the changes in my fertilizer program where I wasn't really fertilizing much this time of year. Two years ago before I started using Civitas I would apply quite a bit more fertilizer through the winter, until I came across Growth Potential. Now my greens really aren't that green, at least not compared to the colour of Harmonizer.

Talk about paranoid. Looking back it's quite clear how the effects of working alone, more often, without having the luxury of a second opinion blurred my judgement. The weather, darkness, and having to work more to cover all the days of the week by myself broke me down.

It also points out the biggest drawback of using pigments in turf. It takes away one of your best tools for assessing how the grass is doing. Your eyes. With the persistent artificial green I was unable to see the gradual changes as the season progressed. 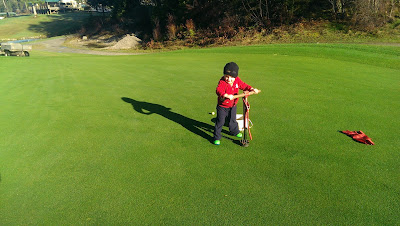 Over a week has now passed and I feel a lot better about the condition of the greens. They've been better but they appear to be alive now haha.

If it wasn't for the help and concern of my fellow superintendents and wife I might have done something foolish to try and fix the greens. Working alone this time of year definitely takes a toll and it's really good to know that if I need help, it's there. Thanks guys. 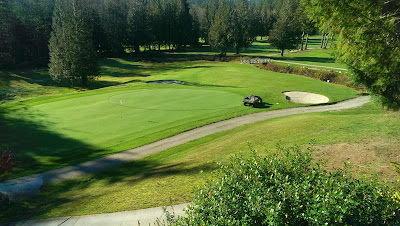