When is the best time to water greens? 2015 recap.

I watered my greens differently in 2015. I shared my thoughts about watering greens first each night instead of last in a blog post in mid July. During that time I was having a lot of success with this watering regime and even though the record drought of 2015 continued for another month and a half I continued to have success. 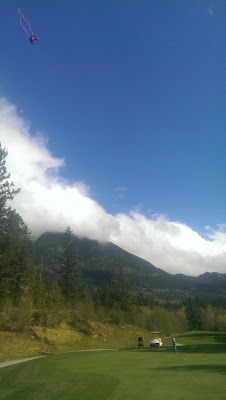 To recap, I decided to water my greens first thing each night with the thinking that this early water would give the plants what they needed sooner, allowing them time to recover from the daily stresses during the cool nights, and hopefully have no impact on the amount of disease I had on my greens. The old way of thinking always said that it would be best to water the greens last to minimize leaf wetness but my observations showed that the leaf was normally wet all night anyway due to dew and guttation.

I recently outlined the successes I had in 2015 with reducing the cost and EIQ of pesticides on my golf course. This success was especially apparent during the time that I was required to irrigate the golf course. From mid May until the end of August I did not require a single fungicide application except for regular phosphite applications. In my experience and opinion, watering first thing each night does not lead to increased disease incidence. I saw many diseases this summer but they never became an issue that required curative action with a fungicide. Dollar spot, brown patch, anthracnose, and others were present but couldn't muster the power to cause any issues.

I think this watering regime could be especially beneficial in the battle against dollar spot. I have always noticed that dollar spot was worse in dry areas. As I was able to give the plant water sooner, it was able to start recovering sooner. This was the first year that I have done literally nothing to control dollar spot on my course. Maybe it was a good year weather wise?

The fact was that despite the record drought and temps in the mid to high 30's for most of the summer, I had the easiest summer of my 9 year career as a superintendent at this course.

The old idea that poa is weak in the hot summer temperatures just wasn't what I was seeing this past summer. It did just fine, didn't require any extra care and required very little inputs despite the challenging conditions.

For most of the summer I only used Dispatch as my wetting agent on the greens. I had some Revolution just in case and only ended up using it to use up stock and not because it was needed. The cost of dispatch on my greens was about $25 per acre (0.4ha) per month where Revolution costs over 20x that! If there was any time to put this product to the test, this was the year and to my surprise it seemed to work. That or it did nothing and my watering scheme was to blame for the ease of watering all summer.

I used wetting agents from May until the end of August. This year I used Dispatch from May-July for a cost of $75 and used up my inventory of revolution in August. Even though Revolution is a good product in some instances it doesn't make sense to use a product that costs over 20x as much if the cheaper product gets the job done. For me it's an easy decision.

Unfortunately I don't have the ability to test firmness on my greens but I can say that they seemed to be firmer this years than in past years. Maybe the extended time allowed for the water to soak into the soil during the cool nights helped?

I also don't have good information on the time we spent hand watering but for the most part it wasn't any different than any other year in the past.

Maybe it was my watering scheme, maybe it was a miracle? I don't know but syringing is a practice that probably needs to go. As long as your plant has sufficient water I don't think there is any point in applying water during the day unless you want to waste water.

So there you have it.  I changed the way I watered my greens and coincidentally had the easiest year watering my greens, reduced my wetting agent cost by a lot, didn't require any fungicides, and slept well at night. I highly suggest that others give this a try on their course and maybe you will see similar success.