No, I'm not talking about tearing your greens apart with verticutters to try and reduce the puffiness.  Arguably one of the biggest issues with poa annua is that it will produce seed heads even when maintained as greens height turf. This seed leads to puffy turf conditions which leads to bumpy and slow putting conditions. In Canada, there is no chemical control for seed head on poa annua so we are forced to live with this issue.

Back before I had a roller we would have a very difficult time with seed heads. The greens would be so puffy that it would stall our mowers when we tried to mow them. We would often go out with the verticutters to try and remove some of the seed head material in an attempt to reduce the puffiness of the greens. This often was a failed effort and usually only helped spread fusarium around the already stressed turf. I haven't used my verticutters in years for any reason. I also don't do anything different with regards to fertilizer either as I shared in a post from 2013.

Back in 2010 I started rolling my greens. Since then my issues with the poa annua seed head have steadily decreased to the point where now it's a non issue. I always knew it was due to rolling but what about the rolling was reducing the puffiness of the poa? At first I thought it was simply the smoothing effect of the rolling but this doesn't explain the decrease in puffiness of the poa. I also thought that maybe there was maybe a physiological impact. I first wrote about this in 2012.

Take a look at the top of the rolling head of my roller last May.
Last May while rolling I made the observation that there was a lot of seed sticking to my roller. I had noticed this in the past but had never thought much of it.

It's no secret that I roll a lot. Two and sometimes 3 times a day is not uncommon, especially during the seed head flush in the spring. It appears to me that the act of rolling is actually physically removing the seed from the plant. It's not just squishing the plant down as I had thought in the past.

It is often stated that collecting poa seed is difficult. Well I think I have a solution, anyone want some of supergrass?

I don't think that this impact will be observed on all rollers, however. I have noticed that on larger diameter rollers the seed doesn't seem to stick as well. On my True Turf roller I have 3 rollers on each steering head and each roller is always completely full of seeds after each green. With a larger roller with fewer rolling heads you would probably remove less seed head. The drive roller does not collect seeds on my roller.

There is a lot of discussion among those with access to chemicals which can suppress poa annua seed heads about efficacy and timing. Even if I had access to these products I don't think that I would use them. I would simply roll 1 or 2x each day during the times when the seed head was present and would stop worrying about timing an often ineffective chemical application. I often wonder if some people who have recently started rolling more have been blaming their successes in poa seed head control in a PGR when it might actually be from rolling. Another reason to leave check plots out there.


A few years ago I did a count of how many seed heads were present on a square inch of turf on my rolling moss study. Here were the results. 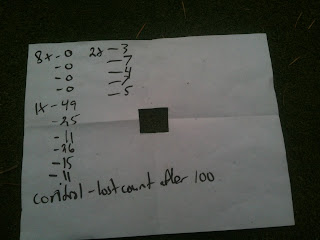