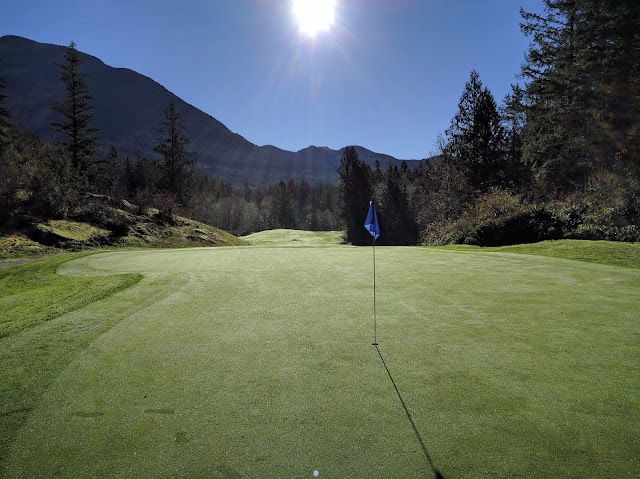 In my last disease update I looked in depth at my nitrogen use on a month by month basis to analyze what I was doing to see if it was the cause of my disease issues. During this process I decided to compile all my fertilizer data going back until 2008. Sadly I cannot find any records from before then.

Looking at these charts it is clear that before 2012 and my adoption of the MLSN guidelines that I had no clue what I was doing as far as fertilizer goes. The rates of P and K are widely variable as I was undoubtedly trying to chase cations or something.... All I can do looking back is shake my head but at the time I didn't know any better. I was just following the fertilizer recommendations based on the faulty BCSR. What a waste. It's no wonder that MLSN made so much sense to me when it was released in 2012. Fertilizer didn't make any sense to me!

Since that time the rates of all nutrients applied to my greens has gone down. From a high in 2008 to a low in 2016 I have only seen conditions improve during this time. 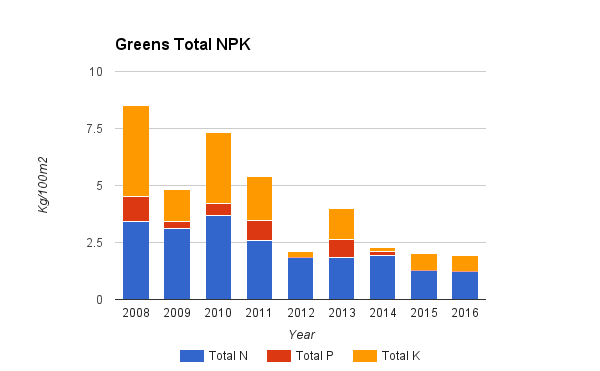 Looking at the above chart it's very obvious when the MLSN guidelines came out. Instantly P and K were no longer needed to provide a "balanced" soil or push spring root growth or summer heat stress tolerance. 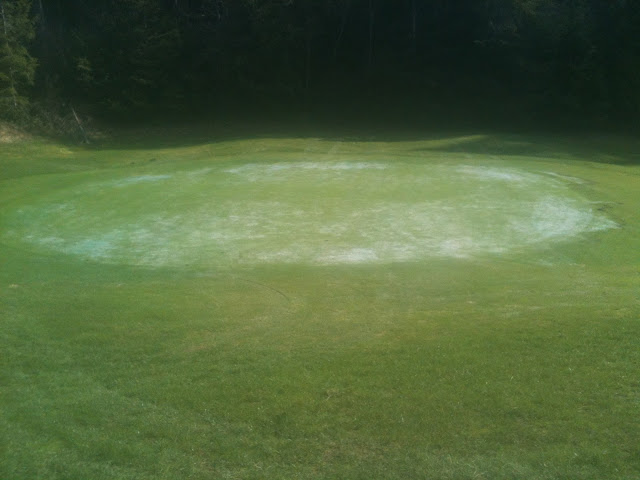 I had a rough winter where I lost a lot of grass on most of my greens. Shade, poor drainage and golfing on frosty turf all contributed to the disaster. Looking back it was this catastrophic event the allowed me to starting working to remove shade and improve drainage and make a big difference.

Regardless, I had to grow some grass and as this happened the first year after adopting the MLSN guidelines I had my doubts. My greens were mostly poa and the best way to grow poa is to fertilize the grass so that's what I did.

The past few years have been disaster free and I have never applied less fertilizer on my greens. Part of it is because of the MLSN and the rest is from adopting the growth potential model for timing fertilizer applications.

The physiological impact of making such a drastic change to the way you fertilize your grass is huge. Because I made such huge and drastic changes all at once I was a bit worried. If anyone in the future decides to make the change to the MLSN guidelines I would suggest comparing where the MLSN guidelines will take you and for the first year meet it half way. That way the changes are slow and you won't have a panic attack like I did.

As you can see, 2015 and 2016 have been almost identical as far as macro-nutrients are concerned. This is because the soil levels for K has fallen down to the guideline and I am now applying K to stay at or slightly above the guideline. The soil doesn't contain any excess K.

Soil P levels have gone up even though I have applied no P fertilizer. This is from the slow conversion of phosphite to phosphate as I understand it.

The following chart shows all the nitrogen applied per month per year. It's a mess of a chart but there is one clear odd one out. July 2010. Jeeze I never thought looking at fertilizer rates would bring up so many bad memories! 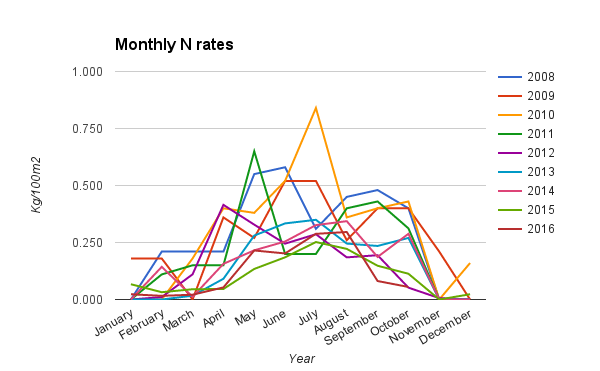 In June 2010 my best friend's dad passed away. I went away to his funeral and when I came back this is how my greens looked. 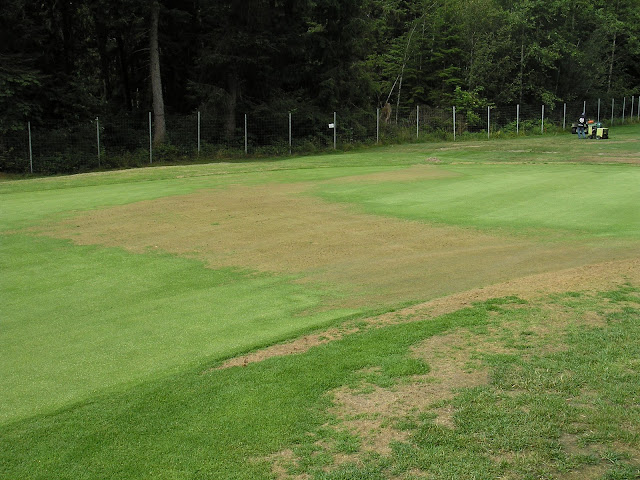 Long story short while I was away the greens were watered for 4 hours during the afternoon with temperatures in the low 30C range. That's when I learned about how grass can boil to death. Needless to say I wanted to get them back in good shape ASAP as it was the middle of summer and this required a lot of fertilizer.

Wow, I've had a lot of grass die on me over the years.... But since the winter of 2012-2013 we haven't lost any grass and this is because we have put less reliance on adding more fertilizer to make the grass healthy and more reliance on providing adequate fertilizer, sun, and drainage.

The fairways at my course comprise about 10x the area that my greens do. Therefore any savings that I can make on my fairways will save me 10x as much money or more. My fairways are on native soil. 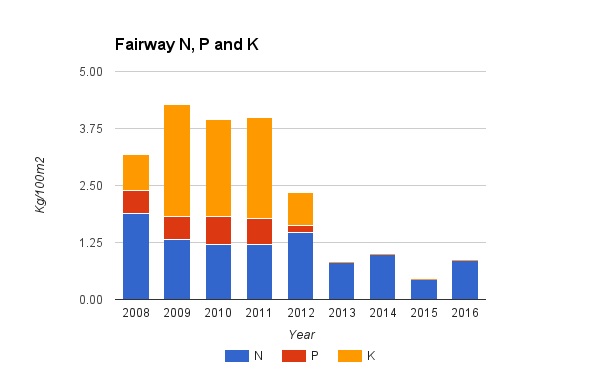 In 2012 I actually applied more N that the previous 3 years but make a huge reduction in the amount of P and K applied. At this time I was still applying fertilizer in a granular slow release form as this was the only way my equipment would allow me to spread fertilizer. I wasn't gutsy enough to apply granular nitrogen to my fairways so had to settle with a blended fertilizer.

In 2013 I got a big sprayer and started using urea because other superintendents had shared that they noticed no measurable difference between urea and slow release N except price. Since then I have taken soil tests on my fairways and they still have plenty of nutrients. We have only applied liquid applied fertilizer on our fairways since 2013.

We don't collect clippings on our tees therefore nutrient removal from mowing is less of a thing even though they are on a sand root zone. Again, I have no clue what I was doing back in 2009-2010. Must have been applying K for divot recovery or some crazy thing. Maybe I read that grass needs K at a 1:1 ratio with N. No clue. 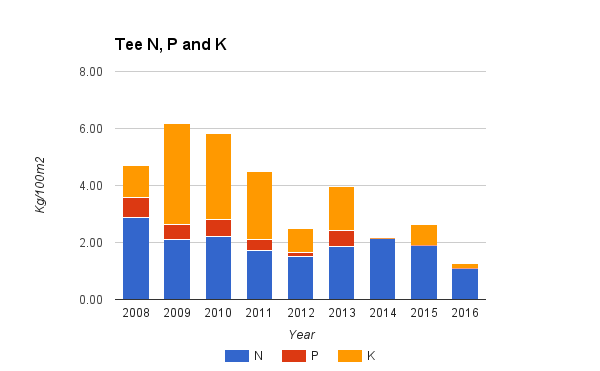 In the end, the only thing that matters is that the tees have never been better or had less weeds (no herbicides used in the time of this data collection) and I have never spent less on fertilizer. Why apply it if it won't make things better?

It is especially concerning to see how much excess fertilizer I was applying back then that wasn't having a meaningful impact on the quality of our grass. The extra nitrogen was definitely having an impact on the quantity of grass as I have had almost no excess clippings to deal with over the past few years. We had one day in late August when growth rates spiked a bit due to heavy rains and most likely some soil mineralization. That was it and to think of all the effort we used to spend to try and reduce clippings with special mower attachments and endless mowing and blowing.

If you want to learn more about the MLSN I will be doing a talk with Larry Stowell from PACE Turf at this year's GIS in Orlando. https://www.golfindustryshow.com/gcsaa-education-conference/seminars/2017/mlsn-guidelines-and-growth-potential
Posted by Jason