Ok, so this is going to be a long one, but if you struggle with dollar spot and want to maybe reduce its impact on your grass and budget I promise it will be worth your time.

Last week while at the 2017 Golf Industry Show I was a presenter at a panel discussion called "Successful Low-input Turf Management: Is it practical?" One of the things I discussed was how the growth potential formula got my nitrogen rates on track and helped reduce the impact that dollar spot had on my course. After this talk and my release of the slides on my blog (linked above) I had a few people reach out with their similar dollar spot success. Of course I asked to see their fertilizer records and by no surprise to me, during times of typical dollar spot disease pressure, they were applying their highest rates of nitrogen (among other things).

During my presentation on the growth potential and the MLSN I urged participants to take their growth potential nitrogen use recommendations and compare it to what they were currently doing on their course. I outlined the importance of proper amounts of nitrogen on dollar spot (which is the most costly disease to control in N.American golf) and asked them to see if maybe the growth potential model would recommend a nitrogen rate that would reduce the impact of this costly and devastating disease. 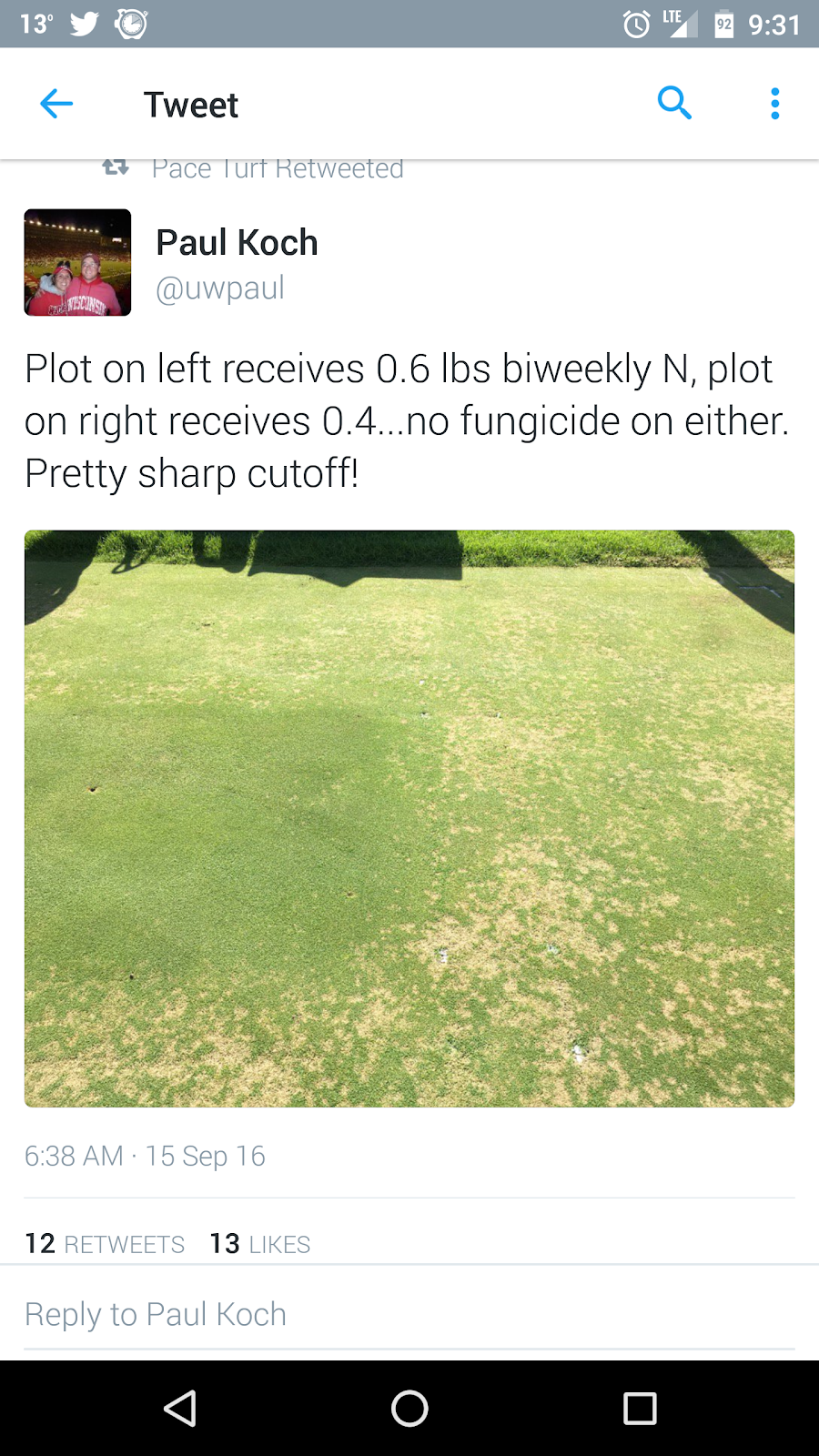 One of my favorite tweets of 2016 was this on the left. It clearly shows the impact nitrogen has on dollar spot. Note the date of this tweet, mid September. I don't know about you, but that is when my course gets absolutely destroyed with dollar spot and it looks like the other plots are also getting hit pretty bad.

If we apply the grammar of greenkeeping to these rates they suggest that they are applying a log% of 94% more than the growth potential for Madison Wisconsin in September.

The great thing about this blog, and social media is that you can throw out an idea and inspire others to reach out and share their experiences with you. This is exactly what happened last week. A superintendent from the Toronto area reached out saying that he had "no Dollar Spot on fairways where other clubs in the area struggle with the disease." Included with the email was his fertilizer records for fairways. I asked when they typically had the worst dollar spot and the answer was September just like it is for me.


But I want to know how that relates to the growth potential for that specific climate and how much he is deviating from it. Again using the grammar of greenkeeping.


If you look at the last column you will see how far he deviates from growth potential. Wow, way over in September which is the time that they typically have the worst disease and actually lower during the rest of the year.  I wonder if he was applying nitrogen closer to the gp all summer long if he could use less nitrogen in September and maybe avoid the negative consequences of such a high nitrogen rate such as increased growth and mowing?

While the study in Madison was at 94% over the GP, the super in Toronto only needed 60% over to get success.

Our golf courses aren't science experiments which often set out to measure the impact of one variable on a plot of grass. We have many variables that we can throw at this bastard disease and when it comes to IPM, I highly suggest you throw as many variables as you can to get the best results :) This reliance on only one variable is a big problem and something will address in an upcoming blog series.

What the hell else do we know about dollar spot?

I know that it hates rolling and guess what? I love rolling. So maybe the growth potential formula combined with rolling will give you the results you need?
It also doesn't like ferrous sulfate as was outlined in this study. And guess what the super in Toronto was doing?

He uses iron too (more per month than I use per year). So he is hitting dollar spot with multiple variables! How do those rates compare to growth potential? I don't have to do the math that they are astronomically higher than what the GP and MLSN would suggest. My soils have about 269ppm of iron which turns out to be about a 500 year supply!

In this case he is using iron not for plant nutrition, but for pest control. Be careful, at the high iron rates in the referenced study above, it reduced turfgrass quality. Here's another article about iron and dollar spot.

Last September I required the first synthetic pesticide application for dollar spot in a long time. If I was rolling and using the growth potential why did dollar spot get out of hand?

Well there's the possibility that that the golf gods were tired of my arrogance or maybe it is because I was applying less nitrogen than the growth potential formula recommended instead of a log% of 94% or 60% more.  I had some theories last fall about why but it probably had to do with luck and nitrogen rates. I simply wasn't applying enough because I forgot about dollar spot after a few years of success and was pushing my luck in the name of fast greens for an important upcoming tournament that you definitely shouldn't aerate the week before (like someone else did a few years back).

I also wasn't applying as much iron as I had in the past. Maybe that's why? Next year I will continue light iron apps through the summer as in previous years to try and get me through without a pesticide application.

I get twitchy about nitrogen in September because of fusarium on my greens. Generally, high nitrogen makes this disease worse so I start cutting back big time in late Summer. I had been seeing the disease all summer and probably should have pushed my nitrogen rates a bit higher in the summer to reduce the disease buildup so that I could reduce the rates in the late summer when I got hammered (with disease not like in the picture below).

So this is another example from another course that isn't mine in an area that probably gets way worse dollar spot as some would have me believe, but trust me, we get dollar spot here too.
To push this a bit further I want to understand why these high nitrogen rates are reducing the severity of the dollar spot. Is it the nitrogen directly? Is it simply the plant outgrowing the damage caused by the disease? Or does it have something to do with the biology in the soil or a combination of all three? While I have no direct evidence myself, I do have some educated guesses as to why these high nitrogen rates are impacting this disease and this could better help turf managers reduce the impacts of this troublesome disease if the high nitrogen rates simply aren't enough to keep the disease under control.

Personally, I think it's the biology but don't worry, it's not in a vague hippy dippy sort of way.

The first time I learned about how the soil biology might impact dollar spot was in a rolling study by Dr. Thom Nokolai. In the study which showed that rolling had a significant impact on dollar spot, they found that there were also elevated levels of  bacteria and actinomycetes in the soil. Go to 5:00 in the following video for his explanation.

So elevated bacteria might mean more competition with the fungi which are responsible for most of the disease that cause turf damage including dollar spot.

Last summer I came across something interesting in a Turfdisease.org disease update where they say "There is evidence that hydrogen dioxide can aggravate a dollar spot outbreak by reducing natural competitors to the Sclerotinia homoeocarpa mycelium." This was hammered home last week as I sat in on the "Turfgrass Talkshow" at the Golf Industry Show where Thom interviewed David Bataller who is the superintendent for the PGA Catalunya Resort in Spain. In his interview he explained how he used hydrogen peroxide to dissolve soil organic matter on his greens. (yes, you heard that right, I highly suggest you look into this because it's awesome). David explained that there was virtually no negative impacts except "it made dollar spot worse."

I wasn't surprised to hear that and was actually expecting it based on what I already thought which was that hydrogen peroxide was also vaporizing the soil bacteria ( and insects and and and...) which gave the upper hand to the dollar spot fungi. Again, I'm just putting two and two together here, I haven't seen any data on this.

Ok so if soil bacteria and in particular, higher levels of bacteria, are important to dollar spot reduction, why is applying relatively high amounts of nitrogen reducing this disease? Because no matter what some will have you believe, "the overall effect of fertilizer applications is to markedly increase microbial numbers and activity in soil through increased plant growth." No, we probably don't need to add biology directly to the soil, we can do it indirectly and I would argue, more naturally!

So no, my "salty" fertilizer isn't killing the soil.

Am I right about this? Probably, but sadly there is no proof of it that I am aware of for my specific situation ;)

There are things out there that on their own will control dollar spot. Costly fungicide, nitrogen that will lead to increased growth, or iron that can burn the grass. The important thing is to know how each of these things can impact the disease and be sure to use them together to get the desired results.

So if you have trouble with dollar spot or are facing increased environmental restrictions for pesticide use (like they are in Europe) or simply cannot afford pesticides and would like better grass, I would make the following recommendations to reduce the impact of dollar spot on your course:

Is there more to this that I think? Most certainly. It will require a balancing act and some finesse and lots of observation and reflection but either way, I bet it will result in a substantial savings or increased turf quality with little negative impacts on play.

Thanks to everyone who has reached out to me in the past. It helps me learn new things and refine my strategy so that I can share it with everyone here.