@PenderSuper
This was a couple years ago 2014
Greens were "rolled" by mistake with greens roller 3 days after seeding pic.twitter.com/q9zg7J5UcZ
— Robert Lee (@SPRobertLee) March 22, 2017

And in typical Twitter fashion the idea snowballed to produce my second favorite tweet of the week:

Obviously, this is common knowledge but to see such a clear example is pretty cool. You can even see the gap between the steering rollers on his Tru Turf Roller. Yes, you can even tell the brand of roller based on the establishment pattern.

This is something that Dr, Thom Nikolai also found in his rolling research. Check out the following video about rolling for seed bed preparation.

"If we roll the plots several time per week for the month or so before we can get out there and mow, it seems to help the tillering and it fills in a lot quicker and obviously gives you better playing conditions right at the beginning."

This is pretty cool stuff and food for thought for those coming out of winter with damage on their greens. My plan is to roll twice a week on the damaged greens and probably a lot more on the healthy greens this spring while my winter damaged greens recover.

It's no secret that I, and many others in the area, have suffered winter damage on our greens. Needless to say I have done a ton of research on strategies to recover from the damage as quickly as possible. Long story short, it almost always requires temperatures to warm up. There are, however, a few tricks that I have picked up this winter that I haven't read about much online so I thought I would pass them on with hopes that maybe they will help speed up the recovery of any winter damaged grass you might have.

Last month while at a turfgrass conference in Victoria, B.C. I had some awesome discussions with other turfgrass professionals about their experience with winter damage recovery. The following 2 strategies are things that I picked up from others, and will be trying and sharing about this spring.

There really isn't much info out there about this relatively old practice. It's kind of funny because when it was suggested that I prime my seed to speed germination it was new to me even though it is exactly what we do for our wet divot mix that we put down on our tees! I had just never thought about doing it for greens.

The thing about winter damage is that it rarely happens when the winters are easy and warm. It happens during the bad winters and this only makes recovery more difficult. It is currently mid March and I have bentgrass growing from seed on my greens even though the average temperature this month has been only 5c (41F).

There are some rather complicated ways of seed priming but I decided to keep it simple. I decided to prime 5KG of dominant extreme 7 bentgrass seed.

Step 1: Soak Seed in water for 2 days at 20C. I didn't use any fancy air bubblers, just seed in water and stirred it a few times each day and kept the lid on. 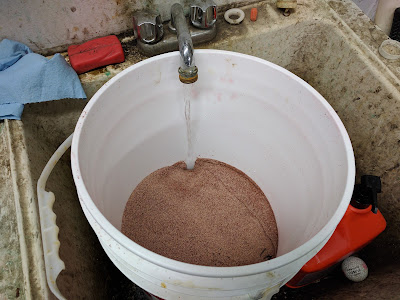 Step 2: After 2 days of soaking I filtered the seed out of the water using a paint strainer cloth. It captured 100% of the seed. I squeezed out as much water as I could in this step. 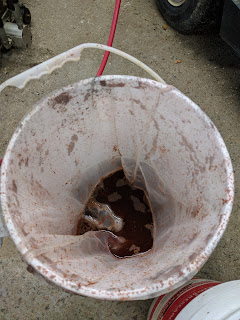 Step 3: I mixed the primed seed with 25Kg compost and 25Kg sand. The sand helped break up the seed clumps and the compost helped retain moisture. I then added some water to the mixture and covered it with a plastic bag to keep the humidity up. I stored the mixture in our lunch room at 30 C (86F) for 2 days. I turned the mixture a few times each day. 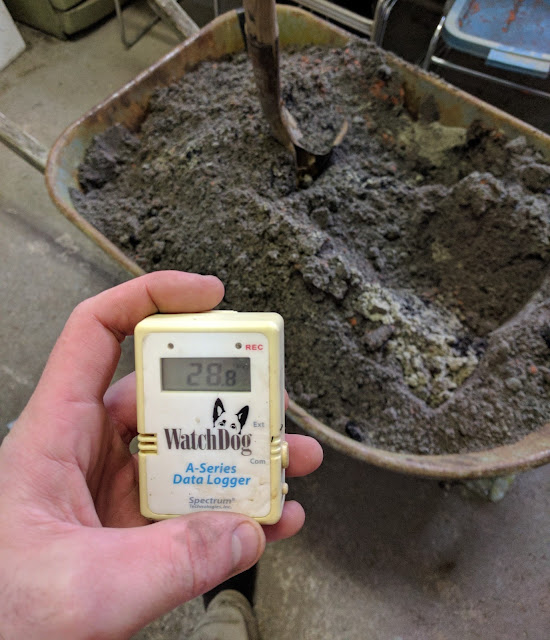 Step 4: This is where I made a mistake. I seeded the grass 1 day early. When we first noticed the seed start to break I decided to spread the primed seed. I should have waited 1 extra day.
I kept a test batch indoors to see what 1 extra day would do. I didn't want to compromise the entire mixture by waiting too long so I seeded it all at this time.
Seeding a wet sand/seed/compost mixture is easier said than done.

First we dimple tined the greens with our aerator. If course we had to shovel the snow off the greens first! 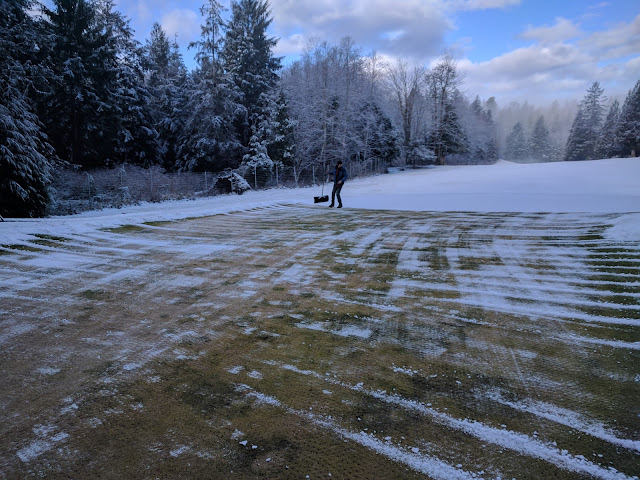 Then we tried spreading it with a drop spreader with no success, it was still too wet to spread.
Eventually we went back to basics. 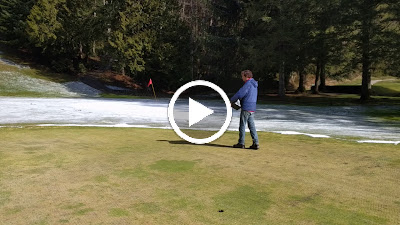 Yes we sowed the seed by hand! To get even coverage we further diluted the mixture 50/50 with sand to allow us to throw more material with less seed to hopefully get better coverage.

After spreading the seed we blew the mixture to try and get it into the holes we punched. Then we rolled the greens. 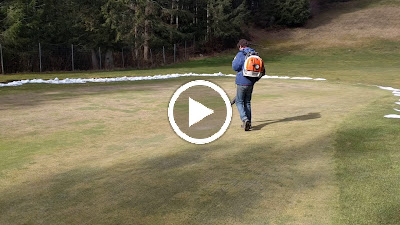 The mixture that we kept indoors for 3 days after mixing with sand is now almost 0.5" tall where the stuff we sowed on greens took 2 weeks to become visible in the aeration holes!
So what would I do next time? Well I am doing it as we speak! I am priming seed to spread on the rest of my undamaged greens to try and get some more bent established. This time, I'll keep the seed in the sand mixture indoors for 3 days before sowing on the greens.

I'll keep everyone updated on how the recovery goes this spring. Will it make a difference? I don't know. I do know, that the seed I didn't prime, still hasn't germinated (I also have a test for that with 0 growth yet).

While at the same conference it was suggested that we try vegetative propagation to re-establish the damaged areas. We were talking with Larry Stowell who informed us how Torrey Pines converted their bentgrass greens to poa.

This exact same thing could be done on greens damaged in the winter. Core the dead areas, and spread cores from live areas into the holes on the dead spots. No sod, no seed.

I won't be trying this method this year but a friend of mine might be. I'll pass on the results if it ever warms up enough to see results!

So there you go, 2 ways of dealing with winter damage that aren't often talked about. Maybe it is because they aren't worth doing? I don't know. What I do know is that regardless of what you do, the most important thing is temperature which we have little control over. I wonder if this will result in quicker recovery or if seed planted later when it's warmer will quickly make up lost ground with the warmer temps?