This tweet started an interesting discussion on twitter today. It centered around herd immunity and turfgrass disease trials and knock out control plots. For those of you who don't know what herd immunity is check out the following tweet.


It’s where in a herd of vaccinated animals (like us) the unvaccinated don’t get disease b/c they’re protected by the herd.
— Brandon Horvath (@UTTurfPath) November 30, 2017


So essentially Pat might have a clean check plot because all the turf surrounding the plot is treated for disease and this prevents the spread of disease onto the check plot. The discussion then goes on to talk about how there might be better value to have fewer large plots vs many smaller plots to try and account for this apparent phenomenon.

Exactly. @luke1utk was @UTturfgrass intern w/Pat this summer and I had him do an independent study on this topic. Jeff, his conclusion was it might be more informative to have fewer, larger checks vs. lots of very small areas.
— Brandon Horvath (@UTTurfPath) November 30, 2017


This first occurred to me way back when I first started blogging and noticed how disease was spread by mowers. It's sort of the opposite of herd immunity but goes along with the same idea. If we have a plot treatment that is surrounded by diseased turf, it might not matter how effective the treatment is if it is constantly being hit with artificially high amounts of disease.

I was attending a conference seminar from Thom Nikolai about rolling and much to my surprise he shared some of my observations about moss and traffic in his presentation. He also shared his now well known observations on how rolling could reduce dollar spot incidence.


In his study (like most disease studies) the plots of rolled, rolled twice, and not rolled were all directly adjacent to each other. I wondered how the plots were mowed so after the talk I approached him and asked him. He informed me that the plots were mowed in multiple directions and would go from one plot to another. Hmmmm.

I wondered if that he would have had even more significant findings if mowing had been more carefully done to prevent spreading of disease from one plot to another.

I wonder the same thing about a lot of disease control studies. Is the intense inoculum on the control plots being spread to the adjacent plots making their results seem less significant. If you applied the plot to an entire green and didn't have that intense disease pressure directly beside the plot would it be so bad?

I think this is why a lot of turf managers claim great success with certain practices but when scientist go to test it out it proves to be less effective than previously claimed. Generally superintendents apply their practices to the entire course or putting green which will eliminate the super bad control plot areas that are the source of the bad disease. 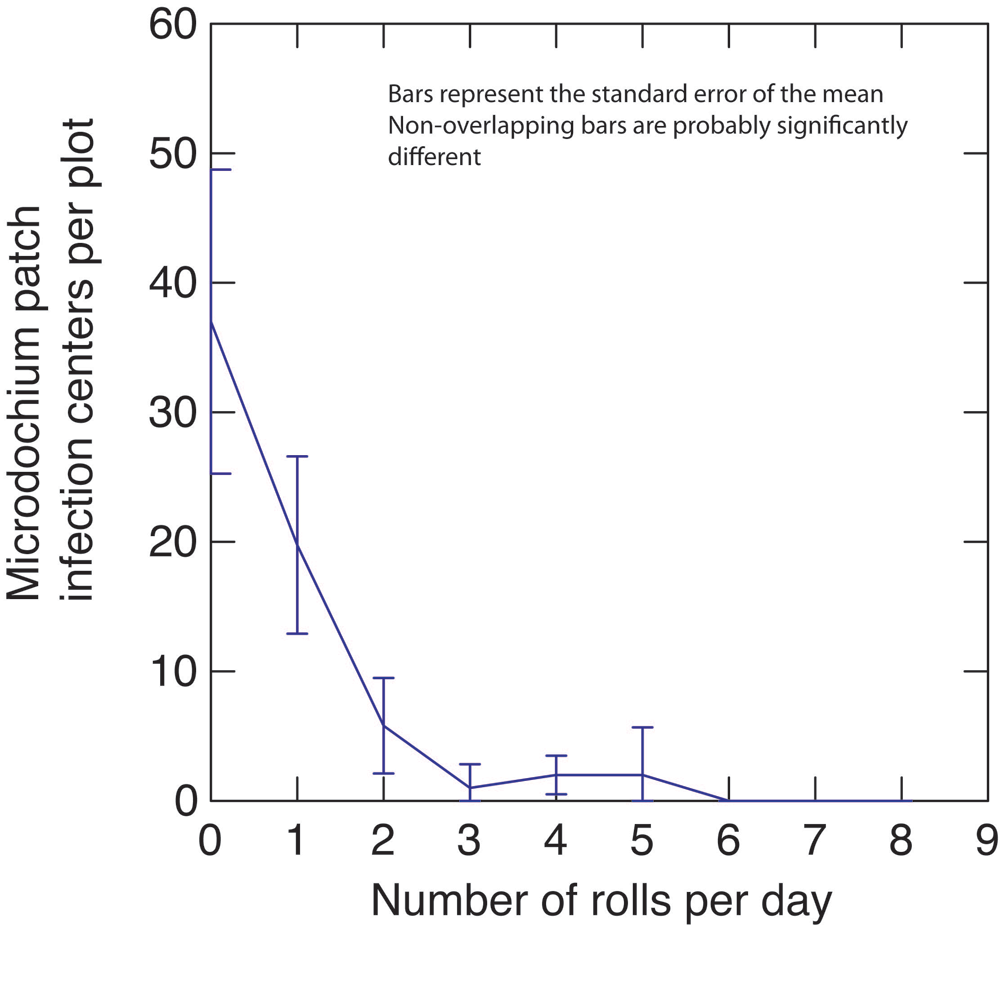 In some trials this isn't a problem because the plants are protected by products that work independently from the plant to fight disease. In other circumstances the way we control disease is less independent and requires the host plant to do the work or certain cultural practices to do the control. Basically we are preventing the infection by maintaining a healthy plant or desirable growing conditions but this doesn't mean that if the disease is spread all over with mowers that the disease won't infect the plant.

This summer I again had issues with dollar spot on a few greens. It became apparent after months of no fungicide treatment (something I have always done to try and learn about the disease) that the dollar spot was spreading from my collars onto the green edges and then throughout the putting green. My original plan was to give the greens enough nitrogen to outgrow the disease.

I hypothesized that we probably didn't need as much as was shown in the above tweet because again, we didn't have disease spreading from adjacent control plots.

I was wrong. I had an uncontrolled plot on all my greens, the collars that I wasn't managing the disease on because it never really resulted in full on dead grass. This was a big mistake.

The above picture shows how the disease was spreading from the collar onto the green. The collar wasn't sprayed with my weekly nitrogen applications because it was just out of the width of my booms and I thought it was no big deal. I have often thought of the gps sprayers as overkill but here is a great example of how they could benefit my simple operation. Of course, there are also much simpler solutions to this issue.

So the collars didn't get enough nitrogen to keep the dollar spot at bay. I also wasn't collecting clippings on my tees collars and approaches which were all cut with the same mower. So the cutting units would be covered in infected clippings which would fall off all over the place. As we were cutting the green collars the infected clippings that we were mowing would blow into the air and onto the greens where they would infect the greens. From there it would be spread by my greens mower to result in disease that was worse than what I had deemed as acceptable.

For the most part if you would have had 4'x4' plots on these bad greens you would find that my higher nitrogen and and rolling regime was working to control dollar spot. But overall, there was just too much disease.

While my attempt to manage dollar spot without fungicides last summer failed I feel that I was very close to success and this observation might help me find success next year.

What I need to do differently next year is treat my collars the same as my greens. I need to give them the same fertilizer treatments and collect the clippings to prevent disease spread.

So while it's not the same as herd immunity it is a similar story. Before we had miracle pesticides and immunizations for disease, we would isolate and try and prevent the spread of disease. If we need to manage turf disease without the use of traditional pesticides I think we need to take the same approach and try and prevent disease across the entire managed turf area and treat the individual cases to prevent them from spreading further to otherwise healthy plants.

While a preventative fungicide application can prevent all of this from happening, if you have restrictions to their use, or just want to save some money this might be useful to know about.