Last week we (fellow superintendent) got the first automower in Western Canada to be used on a golf course (from what we can tell).

I've talked a lot about robot mowers recently and how they could potentially benefit golf with mower savings of up to 50% but more realistically 20-30%.

Micah Woods also recently wrote about how they are more energy efficient and can help reduce GHG emissions even when the electricity comes from coal.

So in theory these machines could be a game changer for golf and turfgrass management. They are also the best solution to transitioning off fossil fuels without having to spend a fortune on big electric mowers.

Even though these mowers have been used for quite some time in golf, there is little information other than a few youtube videos and my blog posts. So we decided to give one a go and see for ourselves how it would work and share the experience.

The superintendent who is testing out the mower set it up on one of his fairways. We set the HOC down as low as the machine would go to 2cm. Modifying the HOC lower would not be difficult with a few shims but as this is only a demo machine, we cannot modify it.

Setup was very easy with the wire being strung around the perimeter and fastened to the turf with plastic pegs. For a permanent installation I would install the wire under a narrow layer of sod to protect it from golf club swings. Make sure you lay it where you want it otherwise you will be doomed to ugly cleanup cuts for ever!


After that you just let the machine go and to be honest, it's not that impressive, but in a good way. To see this little machine bounce around the area is not very fantastic,  but after a week I returned to see that the grass looked exactly the same as when I last saw the machine. Whoa, it works!

The cleanup cuts were impressive as the machine uses the perimeter wire to find its was back to the charging station.

When someone touches the machine it lets out a super annoying alarm and instantly notifies the owner via text message.

Turf quality is OK. I won't say it's GREAT because it isn't. At only 2cm the height just isn't low enough for premium fairway turfgrass in my opinion although it's surprising good for being so high. The logistics of how these machines work are very interesting. They aren't like conventional mowers where there is a certain capacity per hour. These mowers have a total capacity period, no time limit.

The way they work is they bounce around the area for about 20 hours a day. The rest of the time they are charging themselves on the docking station. So during that 20 hours, they mow almost all of the area at least once, and a lot of the area more that once. When you think of it, the area down the middle will have the machine pass over it multiple times each day as it zig zags down the fairway.

Because the mower doesn't work like conventional mowers that only cut grass once, it covers a lot of the areas a few times a day.  I estimate it to mow a given area about 3-5x a day. There are few courses I know of that cut that often! There area  few reasons they do this.

Simplicity: It is way easier to have a mower just "randomly" drive around than drive super specific paths with little overlap. This is why the conventional robot mowers you see are so expensive and have such a low capacity. They are super complicated machines. The automowers are super simple machines.

Efficiency: It takes a lot of power to cut long grass. This is why our big rotary rough mowers have such big engines and require so much fuel. The costs goes up further with tier 4 emission regulations for high horsepower engines. The robots need to be super energy efficient to be fully electric, small, and affordable. Therefore they cut the grass super frequently to only take a little grass off at a time. This allows them to maintain a relatively large area almost constantly with little power required. It also allows them to use cheaper and smaller batteries which are still quite expensive.

As we aren't paying a person to operate this mower, the time it takes is irrelevant. The machine is almost silent and we have had no comments from golfers over the past week. As I said earlier, these machines are not very impressive at first glance. They just trundle along.

It just happens that for a lot of courses the capacity of this mower will be the size of the average fairway.

These mowers have a very small wheel base similar to that of a reel type mower except the blade disk is on an angle so the only part that cuts is directly between the front wheels. Our test site is a fairway that is very bumpy and this machine scalped long turf in the BOTTOM of a few dips that the conventional mowers couldn't reach. No scalping on the tops so far.

The way height of cut works with these mowers is also different than conventional mowers.

You might set your HOC at 12 mm with a conventional mower and go cut the grass. Immediately after mowing that is about the height of cut you get, but as time goes on, it gets higher and higher. How high is the grass when you mow it again? If you figure this out you can calculate what your average HOC is with a conventional mower because that's all it is. An average over time.

With the automower the HOC is the HOC. As discussed above, most of the area gets cut multiple times a day so the HOC stays the same. This allows you to maintain a similar average HOC as conventional mowers with a higher bench height setting. It's weird to think about but that's how it works. Also, no clippings!

As I mentioned, the turf quality wasn't what I would expect on premium turfgrass. Obviously the height needs to go down.

There is also no striping so the grass grain really shows up and looks a bit mottled. This could be fixed with a weekly roll which would give you many more benefits to just mowing such as reduced disease, more consistent appearance, and a quick and cheap process.

We are going to test this machine out for a few more weeks on the fairway and will then move it to some high profile rough.

This now has me thinking of how to optimize the area that each of these mowers can cover. Below is an image I put together with theoretical areas each mower would maintain. When doing this you want to have as many different areas to intersect at one given location to minimize the amount of power wire you need to install for the charging stations. If you have satellite irrigation controllers you already have the power wire installed so what are you waiting for? 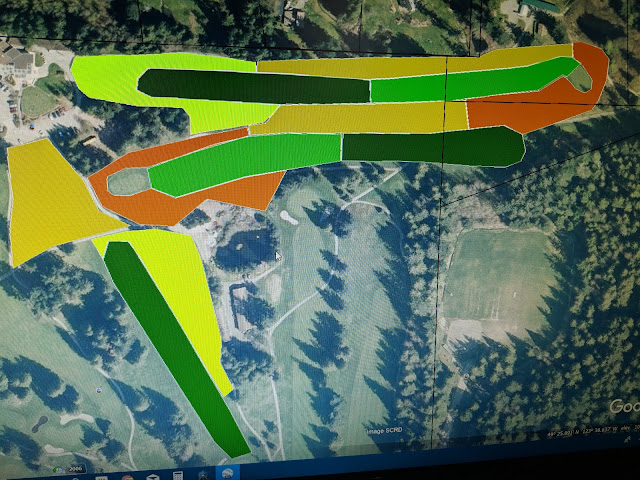 These machines are ready for golf out of the box. While not for premium turf, they would be more than adequate for most courses and with a few modifications would be even better. They offer huge advantages to an industry facing labor shortages, rising mower costs and rising fuel costs. With these mowers we can allocate our staff to do the important jobs we used to do before the golf industry entered the recent decline.