Genki vs Growth Ratio is a game changer


I've experimented with how to best visualize growth rate data in a way that helps me make informed decisions about how much fertilizer I should apply so that the grass grows at the right rate without growing too fast or too slow because both of these circumstances can lead to less than ideal conditions on the golf course.

A few years ago I came us with the turfgrass speedo. (NSFW link haha).This helped me compare actual growth to ideal growth but that was it. I couldn't see how any of the tools I had to manipulate growth were impacting that growth.

A few months back Jon Merchant shared how he visualized his #clipvol data combined with the turfgrass genki. To me this was a game changer. It instantly allows you to compare your growth rate and fertilizer rates compared to the "standard amount." The standard amount is something that you can determine as a turfgrass manager based on your experience and the needs of your turfgrass to produce the desired playing surfaces for your facility.

This standard amount is multiplied by the Pace Turf growth potential daily. For me the standard nitrogen amount is 2 g/m^2 per month which results in a clipping yield of 625 ml/m^2 per month. Multiplied by the growth potential (which is always less than 100%) will result in ideal yield and nitrogen rates always being lower than this standard amount. You can use all sorts of high tech ways to determine these rates but I would just recommend experimenting for what works best for you. At this point I have all kinds of variable such as pgrs on the final factor. Over-complicating an imperfect model is for nerds. 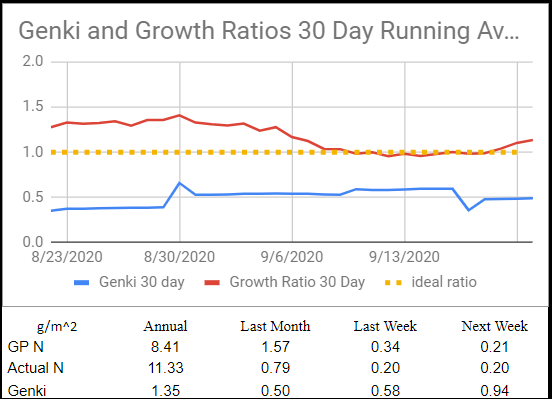 To determine how much clippings you should expect for a given amount of nitrogen you can take the amount of nitrogen applied per month in grams per square meter and divide that by 0.064 (approx mass of dried clippings per ml) and then divide that again by 4%. I then multiply that by 80% because I don't expect all of the nitrogen that I apply to be used by the plant. There are losses that happen so deal with it. This is something that I have noticed over the years. If I get 80% of the nitrogen I apply back in the clippings I am doing pretty good although that could be improved with this genki vs growth ratio tool.

This is all very approximate but gives you a pretty good ballpark amount to work with. Remember, all models are wrong but some of them are useful. I think this one might be useful.

The genki takes the amount of nitrogen that you have applied and compares that to the standard amount. This gives you a ratio or percentage.

To smooth out the data I use a 30 day running average. Fertilizer and growth rates don't respect the boundaries of days or months so I find running averages useful for turfgrass management because they are smoothed out. Fertilizer that you applied in late July won't just be used in July. It will probably have lasting affects well into August so a running average will help you see that carryover from month to month much better.

As we are comparing two percentage figures we can easily plot them both on the same graph.

On the chart above you can see the genki (blue line) is at 50% for the last 30 days (60 if you include the previous month). This means I am applying half as much fertilizer (nitrogen) as would be recommended by the growth potential. The growth ratio (red line) is much higher in late August and stabilizes in mid September but is again climbing higher than expected.

This tool make it easier for me to fertilize based on actual conditions and not just the date. In August the growth rate was much higher than expected so no (less) fertilizer was needed. The cause of this excess growth isn't exactly known but I could speculate that it was soil microorganisms mineralizing organic matter in the soil. Either way, I backed off the fertilizer apps. I didn't stop fertilizing completely as I always like to keep some fertilizer in the system to prevent growth rates from fluctuating too drastically. Having a genki of 50% avoids these massive fluctuations in my opinion. It also keeps the crummy poa barely alive while allowing the bentgrass to move and make up ground.

As mid September arrived the growth ratios stabilized to exactly where I wanted them to be. This was timely as we were hosting a provincial championship that week so we were easily able to achieve our target green speeds and had minimal growth to manage during that event. We also had almost 7 days of smoke cover during that week so for whatever reason, the growth ratio started to climb back up despite keeping the genki at or below 50%.

As we enter the Fall season I like to back off on my weekly green sprays so if I apply the forecast genki for the coming week but only apply it every 2 weeks I can reliably keep the genki at 50% if that's where I want it. If I want to bring it up to 100% I apply double the weekly forecast limit.

The above graphic might give the illusion that I have my shit figured out but I am only now just starting to maybe get good at this because until I put these two ratios together on a single graph it was hard for me to connect my fertilizer applications to the growth rate intuitively.

The chart below takes my growth rate and fertilizer data going back 2 seasons. You can see that at times I am apply way more fertilizer than the models would recommend I apply. This is mostly due to impatience in the spring. I've tired of grass that doesn't grow and I want to cut something! I don't have growth data for 2018 because that was before I was at this course but you can see that the previous superintendent also liked to get things moving in the spring. It's not just me! In 2019 we were also trying to recover 5 dead greens. 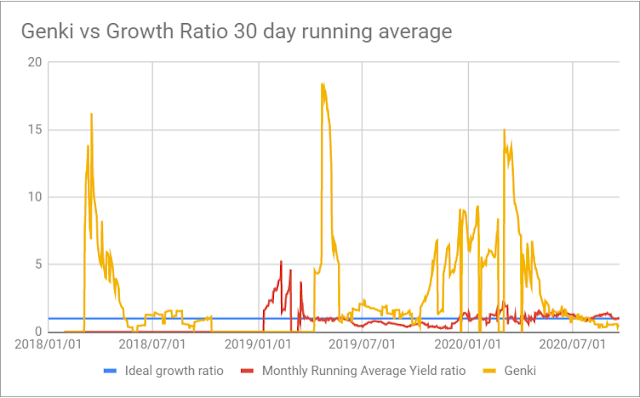 After playing with this stuff for years now I can say that it's actually pretty good. In 2019 you can see that the growth ratio was below 100% for most of the golf season. While this was at first great for green speeds, it eventually resulted in severe anthracnose. While applying more than the standard amount of nitrogen to the greens, they didn't grow as expected due to another nutrient deficiency ( I think). This year after soil testing we got that under control and growth has been almost perfect (slightly high) and the disease issues on greens have been almost non-existent.

If I could only have one chart to look at each day this would be it. I think in the future it would be great to improve upon the Pace Turf growth potential model with machine learning. I know there are some already working on this but even so, the temperature based GP model is pretty darn good and a drastic improvement over a calendar based approach.